Review of the biomechanics of infant sitting[edit | edit source]

Maintaining an upright sitting posture requires the ability to align the body segments so that the vertical projection of the centre of mass (COM), known as the line of gravity (LOG) falls within the base of support.

In infants, the COM when sitting lies within the chest.

In sitting, the base of support in the side-to-side direction is relatively narrow.

In the early months of a baby's life, carers provide maximum support for keeping the trunk erect and stable when carrying infants and also when holding them sitting on their laps.[3] The postural mechanisms that allow the infant to stabilise their head in space and keep their trunk erect and steady are initially learned from this repeated experience of being carried upright and sitting supported.

Sitting facing outwards on a carer’s lap has an impact on postural set, which is influenced by arousal, motivation and curiosity.[4]. It allows the infant to:

As the infant gets older, carers decrease the amount of support they provide and expect the infant to work harder to stay erect,[3] and to use their upper limbs to provide additional support by holding onto available surfaces. 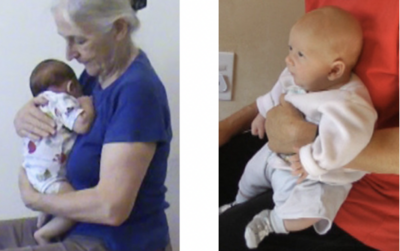 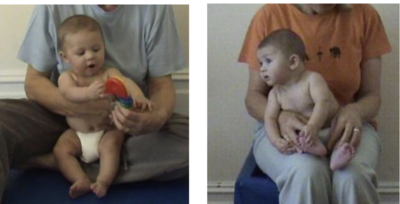 Learning to extend the neck and spine[edit | edit source] 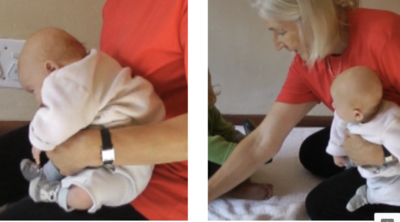 “Postural control is no longer considered simply a summation of static reflexes but, rather, a complex skill based on the interaction of dynamic sensorimotor processes [...] Sensory information from somatosensory, vestibular and visual systems is integrated, and the relative weights placed on each of these inputs depend on the goals of the movement task and the environmental context."[7]

Balance, also known as postural equilibrium, involves the coordination of movement strategies to stabilise the centre of body mass during both self-initiated and externally triggered disturbances of stability.

The specific response strategy selected depends not only on the characteristics of the external postural displacement, but also on the individual's expectations, goals and prior experience.[7] 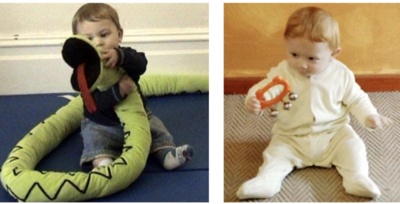 Anticipatory postural adjustments (APA) occur prior to voluntary limb movement, and serve to maintain postural stability by initiating muscle contraction to compensate for destabilising forces associated with moving a limb.

The development of sitting involves increasing control over the neck and trunk segments that are involved in sitting erect and maintaining balance in the head, upper torso, lower torso and pelvis. It starts with the infant first learning to hold their head erect and steady when supported around the upper chest in an upright position.[6][2][11][12] 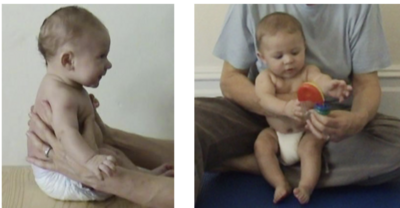 Over time and with practice, infants learn to stabilise their head and trunk when supported around the waist, and later with support around the pelvis. At this stage, typically developing infants are often more interested in reaching for and grabbing an interesting toy than maintaining balance.[13] 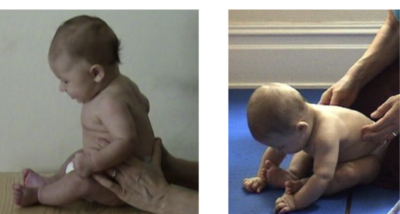 This increasing level of control of the trunk on the pelvis is promoted by frequent opportunities to sit with support during every-day routines and handling.

Once the infant can stabilise their trunk on their pelvis, and sit briefly without arm or external support, typically developing infants start to pay attention to maintaining their balance as they reach out to connect with people and objects in their environment.[14]

With experience, infants learn to reach in all direction, pick up and move objects, and transition into and out of prone kneeling.

A study found that proficiency of sitting in 5-month-old infants varies considerably within and between cultural groups:[18]

Rachwani and colleagues[19] describe the experience of pre-sitting infants as follows: