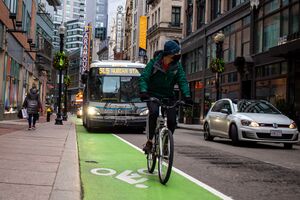 Active transport relates to physical activity undertaken as a means of transport. It includes travel by foot, bicycle and other non-motorised vehicles[1].

Cycling is a low-carbon modes of transport that enhance urban quality and facilitate social fabric. It is also a cheap, flexible, personal mode of transport[2].

While cycling is among the greenest ways to travel, replacing cars with bikes would have many other benefits. These include: cutting congestion; addressing health problems associated with sedentary lifestyles; increasing life expectancy; cutting particulate air pollution (a problem which shortens global life expectancy by an average of 1.8 years according to one study and has also been linked to an increased COVID-19 death rate)[2]. 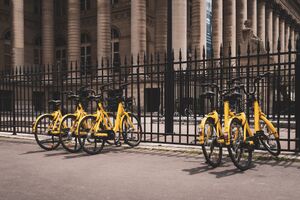 The Institute for Transportation and Development Policy’s bikeshare planning guide reports that today, more than 600 cities worldwide have their own bike-share systems, and more programmes are starting every year. The largest systems are in China, in cities such as Hangzhou and Shanghai. In Paris, London and Washington, D.C., highly successful systems have helped to promote cycling as a viable and valued transport option.[2] 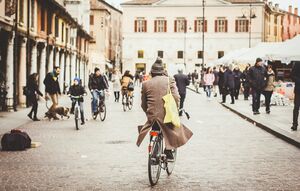 Cycling has become popular for a variety of reasons. It helps to reduce the risk of diabetes, some forms of cancer, cardiovascular diseases and depression. Research from the United Kingdom found that cycling to work is linked with a 45 per cent lower risk of developing cancer, and a 46 per cent lower risk of cardiovascular disease, compared to commuting by car or public transport. 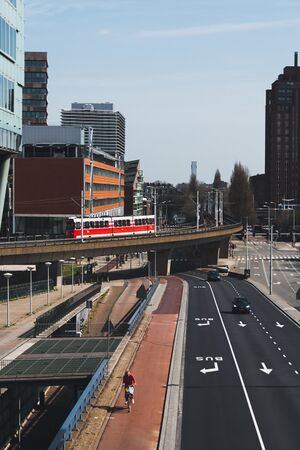 Cycling has a carbon footprint of about 21g of CO2 per kilometre (less than walking or getting the bus and less than a tenth the emissions of driving).

If cycling’s popularity in Britain increased six-fold (equivalent to returning to 1940s levels) and all this pedalling replaced driving, this could make a net reduction of 7.7-million tons of CO2 annually, equivalent to 6% of the UK’s transport emissions.[3]

From a climate perspective, it makes sense for as many journeys as possible to be made by bike. However on a national scale, cycling has a limited role in addressing climate change. Because cycling is restricted to short journeys for most people, it can only replace a small fraction of the kilometres covered by cars. Also terrain has an effect, countries with the highest cycling rates are flat (Denmark and the Netherlands).

If half of all <8 km car journeys were replaced with cycling this would save around 7.7-million tons CO2e in the UK, equivalent to 2 per cent of UK domestic emissions in 2016. Ebikes could boost the uptake of cycling to some extent 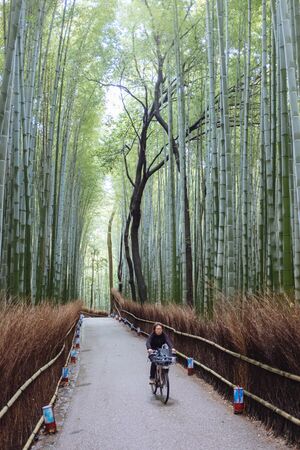 Mining and manufacturing using aluminum, titanium, or carbon fiber is resource intensive. eg the qualities that make titanium a great material for a bicycle frame (hardness and durability) also make it energy intensive to refine, with 70 percent wasted in the machining process.

Bamboo is a greener option. It is one of the strongest materials in nature, it can withstand up to 1ton/cm2 of compression force, this is twice the tolerance of steel. Other qualities of bamboo