Cryotherapy, also known as ice application, is the simplest and oldest way to treat injuries. Its worldwide use spread because of its effectiveness, convenience, low cost and ease of transportation. Ice is believed to control pain by instigating local anaesthesia. It also decreases oedema, nerve conduction velocities, cellular metabolism and local blood flow. The effect of the cryotherapy depends on the method, the duration, temperature of the ice and the depth of the subcutaneous fat. [1][2]

The Lewis hunting reaction or hunting response is a process of alternating vasoconstriction and vasodilation in extremities exposed to cold. The term Lewis reaction is used too, named after Thomas Lewis, who first described the effect in 1930. Vasoconstriction occurs first to reduce heat loss, but also results in strong cooling of the extremities. Approximately five to ten minutes after the start of cold exposure, the blood vessels in the extremities will suddenly vasodilate. This is probably caused by a sudden decrease in the release of neurotransmitters from the sympathetic nerves to the muscular coat of the arteriovenous anastomoses due to local cold. This cold-induced vasodilation increases blood flow and subsequently the temperature of the fingers. A new phase of vasoconstriction follows the vasodilation, after which the process repeats itself.[3]

Vasodilation can be cold induced after initial period of vasoconstriction when cold is maintained for longer than approximately 15 min or when temperature is reduced below 10C. 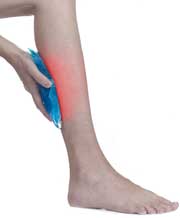 More recently whole body cryotherapy has become popular for athletes, to help aid recover, as well as in persistent pain patients such as rheumatological conditions. More research is needed to understand the effect on the body and its relation to pain.[5]

Ice may contribute to shortening of collagen fibres in connective tissue

Be aware of conditions in which icing is contraindicated[10]