Perception is the integration of sensations into information that is meaningful in terms of psychology. It is the ability to choose the stimuli that need attention and action, to integrate them, and to interpret them.

Perception and sensation are not the same and should not be confused with each other. The sensation is defined as the awareness of stimuli through eyes, ears, nose, etc., internal receptions, or the peripheral cutaneous system. And perception is far more complex than individual sensation.[1]

Unilateral neglect is reported nearly in 25% of the patients who are referred for rehabilitation. It is commonly associated with right parietal lesions.

Rehabilitation- The major goal here is to improve the attention of the neglected side along with proprioception and kinesthesia. The recent techniques of rehabilitation are neck muscle vibration, virtual reality, limb activation training, mental imagery training, TENS, Eye patching, vestibular rehabilitation, and mirror therapy.[2]

Somatosensory stimulation in the form of neck muscle vibration can be applied on the neck of the patient with unilateral neglect for improved detection of stimuli in the same side(affected side) visual field. [3]

It is the denial of illness that may be seen in the patients of head injury. The patients present either lack of concern about the deficit or verbal denial of their illness.[4]They don't realize the benefits of rehabilitation and are not willing to undergo any treatment. Visual field defect, apathy, and unable to identify the pictures are common in anosognosia.[5]It is commonly seen in neurological conditions such as Hemiplegia and Alzheimer's disease.[6]

Rehabilitation- As per evidence, Vestibular stimulation can be given in anosognosia.[2]

There is a lack of awareness of the body structure. The patient even doesn't understand the relationship of body parts with oneself or to others. They may not be able to imitate the movements of the therapist.[7]They deny the existence of their body part and is also known as autotopagnosia.[8]

Finger agnosia- In this condition the client doesn't indicate, name, select/ differentiate the fingers of their land. It happens in patients with cerebral lesions.[9]

Here the patient cannot select and segregate the elements from the background by the visual system.[10] 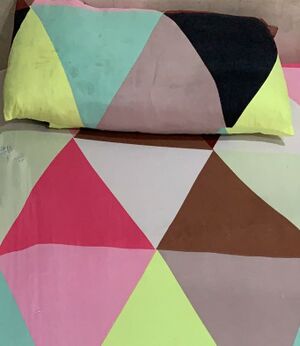 Inability to identify objects of similar shapes. For example, if you ask to identify two similar objects such as an orange and a ball the patient will not be able to identify/differentiate them.

The patient is not able to locate things properly and cannot understand their relationship with one another in space and with oneself. For example, he cannot set a dining table properly and doesn't place spoons, bowls, plates appropriately.

The patient is unable to understand spatial concepts of up-down, front-back, out-in. If he is told to kick a ball kept in front of him via his right leg, he will not know what to do.

The patient doesn't understand where to put the leg during stair climbing. He cannot judge how much water to pour into the glass and keeps pouring even after the glass gets filled.

The lesion is at the right retrosplenial cortex.

Anything vertical appears tilted to the patient. There is a lesion in the nondominant parietal lobe. If he is given the task of holding a cane, he will not hold it in a straight position, it will be tilted.[7]

Virtual reality training programs are applied on the patients with spatial relation impairments and studies have shown that it enhances the spatial cognition and it is as effective as real world training.[11]

In agnosia, there is the failure of recognition. Commonly seen in neurodegenerative diseases.[12]

The tactile perceptions are intact but the patient cannot recognize the objects via palpation. There is a parietal lobe lesion (unilateral/bilateral). The somatosensory functions, intellectual ability, linguistic capacity, and attention are appropriate. Rehabilitation- Faber's approach of manipulation is used in tactile agnosia. The manipulation of the object is done with both hands with or without visual stimuli.

Hearing ability is intact but there is impairment in sound perception. Such patients have intact language and cognitive function.[13] Rehabilitation- Lip reading and communication technique is applied in clients with auditory agnosia.

The patient cannot name the objects/faces/words presented in front of him. For example, the patient may call the bicycle , a pie. It can be assessed by copying /drawing of figures.[14]

Apraxia is a disorder in which the patient cannot perform skilled actions.[12] 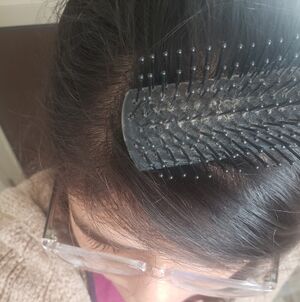 Loss of ability to imitate hand gestures. The client understands the requirements but cannot execute appropriate movements. There occur errors in gesture production.

There is a transitive difficulty where the client doesn't understand the correct concept of the task. Faces difficulties like sequencing the tasks and the usage of objects.[15]

Rehabilitation- The tasks are broken down into various components. Each component is taught at once and practiced. Visual and auditory feedback is proved to be effective. Once the individual tests are learned properly, the physiotherapist adds the complex movement pattern steadily.[2]

Attention Deficit Disorders are commonly seen after stroke.[16] They are common among the ones who have right brain damage. [17]The attention system has a connection with various cognitive functions like cognition, activity performance, language, memory, and spatial organization hence attention deficits can highly affect the functional abilities of the person at home or work.[16]

After the cerebrovascular accident, focused attention(selective) deficit gets cured in the majority of the patients but higher-order attentional problems may persist later. This includes speed of processing, divided attention, working memory, and vigilance.[18]

Neuropsychological assessment is used to classify patients with cognitive issues like language, attention, and memory.[19]

Also known as focused attention. The capacity to do the task in presence of visual, auditory, or environmental stimuli.[7]It is needed when the patient has to ignore certain stimuli.

For example, The patient stops the activity of dressing while talking to the therapist/bystander. Here, the focused attention is affected.

The capacity to address relevant information during the activity. The patient can respond effectively during the task.[7]

The patient can respond to two or more tasks at a time.

The capacity to do multiple tasks appropriately.[7]

Rehabilitation -In attention disorders patients, simple tasks are started initially and practiced several times. Slowly the complexity is added by the therapist.

Memory decline is common after stroke and affects the functional ability of the person. There are various memory deficits like long-term memory loss, short-term memory loss, and immediate recall. The overall deterioration of memory is referred to as dementia.

Vestibular stimulation is proved to be effective to improve visual memory recall. Galvanic vestibular stimulation of low level delivers the current transcutaneously to the vestibular nerves. Here the electrodes are placed over the mastoid bones. The current is bipolar (opposite current applied over each electrode). GVS is of low cost, easy to apply and the patient need not get involved actively.[21]

Vestibular stimulation is the most common form of stimulation used in various neurological conditions and it is proved to be effective in improving motor skills.[22]

Clients with perceptual disorders are usually treated by occupational therapists.

Mainly there are two approaches used - The remedial approach and the Compensatory approach.

As per this approach, the adult brain can repair itself after the brain injury using sensorimotor, cognitive, and perceptual exercises. During rehabilitation, the focus of the therapist is on the client's deficits. The functional abilities of the patient are improved by retraining particular perceptual components. Environmental stimuli are used during the rehabilitation.

Intact skills are utilized and compensated for the skills which are impaired. Specific training of Activities Of Daily Living is provided as it is difficult for the injured brain to learn generalized tasks.[1]