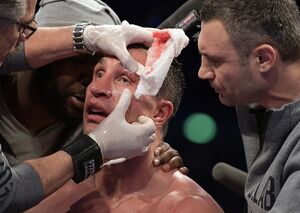 Chronic traumatic encephalopathy is a neurodegenerative tauopathy that is thought to result from mild repetitive head trauma, originally classified as "punch drunk" syndrome due to its prevalence in boxers. This syndrome was first recognized in boxers in 1928, and has been known as "punch drunk" and "dementia pugilistica", its prevalence in other contact sports, such as rugby, hockey and American football has only recently been brought to light[1][2]. 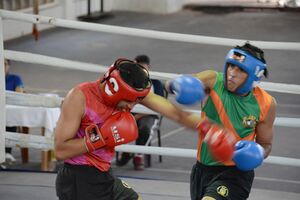 The exact incidence and prevalence of CTE is unknown. Most commonly it is seen in amateur and professional sports players where head contact is common (e.g. boxing, American football, rugby, ice hockey), as well as in military personnel exposed to explosive blasts.[2]

CTE is a tauopathy that results from the culmination of repetitive mild traumatic brain injury (MTBI)[5] . Postmortem analyses have indicated that the symptoms of CTE are associated with neuropathological changes in the brain eg atrophy of certain brain structures and degeneration of myelinated neurons[6]. Like other neurodegenerative disorders, CTE is characterized by the accumulation of abnormal tau proteins.

Symptoms have an insidious onset, most often years after the initial injuries, with loss of normal attention, concentration and memory. This can progress, in some cases in 2-3 years, to include motor symptoms such as impaired gait, impaired, executive function, lack of insight and poor judgment[2] 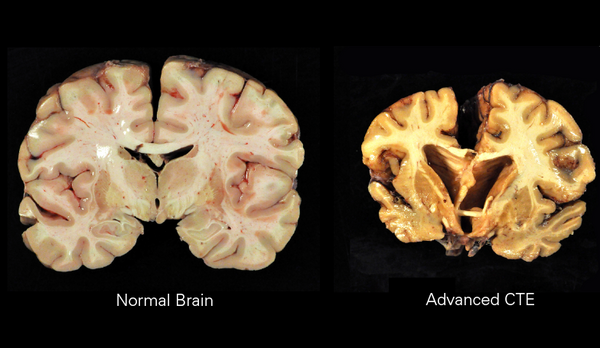 Single incidences of head trauma such as concussion will very rarely result in the development of CTE. However, repeated brain trauma sustained at the sub-concussive and concussive level has been found to be a strong predictor of CTE Development[6].

The core diagnostic features present in more than 70% of confirmed CTE cases without comorbidities falls into the three domains:

Differentiation of these various manifestations of CTE from other forms of TBI like post-concussive syndrome, remains difficult.[7]

There are several brain findings of CTE on autopsy. Notably, there is accumulation in various areas of the brain of certain proteins eg as tau (distinct from Alzheimer’s disease, which shows beta-amyloid plaques). In addition there is: reduced brain weight; thinning of the corpus callosum; frequent atrophy of the frontal lobes. Other affected areas of the brain include the mammillary bodies, hippocampus, and medial temporal lobe, which are involved with memory, as well as the substantia nigra, which is involved with movement.[4]

The development of CTE is specific to each patient, therefore, a case by case therapeutic intervention should be applied.

Although the precise mechanisms are not fully understood, exercise (specifically aerobic exercise) can increase neurogenesis and neuroplasticity[8]. As little as 30 minutes of light to moderate intensity exercise five days a week can greatly slow down the onset of neurological disorder[9].

Implementing cognitive rehabilitation at the early stages of cognitive impairment has a greater chance of positively effecting the quality of life of the individual as they age[3]. Cognitive rehabilitation can be divided into components: restorative and compensatory[10]. The restorative approach aims at restoring impaired skills by carrying out repeated exercise of standardized cognitive tests. These tests should aim to increase in difficulty and should target specific cognitive domains appropriate to the patients needs. Compensatory approach teaches ways of bypassing or compensating for the impaired function[10]. Assistive technology, such as prospective memory aids (PMAs) and retrospective memory aids (RMAs) are used in compensatory interventions. these are context-aware aids that make use of artificial intelligence to determine if a particular guidance is necessary or not at the moment, thus help to remember future intentions[11].