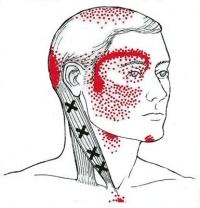 Cervicogenic headache (CGH) is a chronic headache that arises from the atlanto-occipital and upper cervical joints and perceived in one or more regions of the head and/or face.[1]

A cervicogenic headache is a common cause of a chronic headache that is often misdiagnosed. The presenting features can be complex and similar to many primary headache syndromes that are encountered daily. The main symptoms of a cervicogenic headache are a combination of unilateral pain, ipsilateral diffuse shoulder, and arm pain. ROM in the neck is reduced, and pain is relieved with anesthetic blockades.

The International Headache Society (IHS) has validated cervicogenic headache as a secondary headache type that is hypothesized to originate due to nociception in the cervical area. [2] (See more about classification on the headache page). 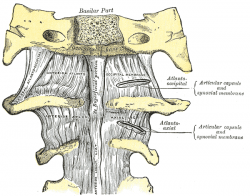 The cervical spine consists of 7 vertebrae, C1 to C7, the cervical nerves from C1 to C8, muscles and ligaments (see cervical Anatomy)

The first two vertebrae have a unique shape and function.[3] They form the upper cervical spine.

This may include the joints, disc, ligaments, and musculature.[5] The lower cervical spine may play an indirect role in pain production if dysfunctional, but there is no evidence of a direct referral pattern.[5] Through controlled nerve blocking of various structures in the cervical spine, it appears that the zygoapophyseal joints, especially those of C2/C3, are the most common sources of CGH pain. This finding is even more common in patients with a history of whiplash. [5]

Challenging to diagnose clinically, but often includes the below:

It is important to differentiate from serious pathology such as:

It is also important to differentiate from other types of headache:

The inverse relationship between headache severity of CGH and ROM towards the most restricted side for the Cervical Flexion-Rotation Test (FRT) was statistically significant for all patients with cervicogenic headaches (Sn = 0.91, Sp = 0.90).[13] The patient should feel no pain at the time of the test. During this test, the neck of the patient is passively held in end range flexion. The therapist rotates the neck to each side until they feel resistance or until the patient says they are in pain. At this end point, the therapist makes a visual estimate of the rotation range and says on which side the FRT was positive or negative. The test was positive when the estimated range was reduced by more than 10° from the anticipated normal range (44°).

Patients with one or more red flags should be referred for an immediate medical consultation and further investigation.[13]

The management of cervicogenic headache is an interprofessional.

Cervical epidural steroid injections: Indicated for multilevel disc or spine degeneration. There is some evidence that cervical epidural steroid injection has some benefits in treating pain in a cervicogenic headache. Steroids can work in this setting due to the theory that the pain continues sensitizing the cervical nerve roots and initiates a pain-producing loop involving nerve root and microvascular inflammation as well as mechanically-induced micro-injury.[4]

Nerve Blocks: Disrupting the cascade of signals leading to sensitization to central mechanisms via:

Although this type of headache is responsive to therapy oriented at treating the soft tissue restrictions, the method of examination, assessment, and treatment needs to be specific to the neck and occiput."[1]

Jull et al[8] reported that a six week physiotherapy program including manual therapy and exercise interventions was an effective treatment option for reduction of cervicogenic headache symptoms and decreasing medication intake in both the short term and at one-year follow-up.

Re-education of craniocervical flexion (CCF) movement[8] The neck flexor muscle synergy is tested with the Cranio‐cervical Flexion Test. The patient palpates the superficial flexors to avoid their inappropriate use. An emphasis on precision and control is essential.

Training the low-level endurance capacity of the deep neck flexors[8] begins as soon as the patient can perform the CCF movement correctly. This phase tests the patient’s ability to hold (approximately 10 seconds) the cranio-cervical flexion position in each stage of the test on repeated occasions. Pressure biofeedback is used to guide training. Training begins at the pressure level that the patient can achieve and hold steady with a good pattern, without dominant use or substitution by the superficial flexor muscles. The patient performs the formal exercise at least twice daily. For each pressure level, the holding time is built up to 10 seconds and 10 repetitions are performed, eventually to the desired level of 30 mm Hg.

Retraining the cervical flexors for antigravity function in sitting position[8] The exercise is a controlled eccentric action of the flexors into cervical extension range followed by a concentric action of these muscles to return the head to the neutral upright position. The return to the upright position must be initiated by CCF, rather than a dominant action of sternocleidomastoid. The exercise is progressed by gradually increasing the range to which the head is moved into extension as control improves, and introducing isometric holds through range.

Extensors of the Craniocervical Spine

The patient practices eccentric control of the head into flexion followed by concentric control back to the neutral position in a 4 point kneeling position to train the coordination of the deep and superficial cervical extensors. These exercises are incorporated with re-education of the scapular muscles in these positions and are commenced early in the program. The exercise is progressed by performing alternating small ranges of craniocervical extension and flexion while maintaining the cervical spine in a neutral position. Co-contraction of the neck flexors and extensors.[8]

Co-contraction of the Neck Flexors and Extensors

The co-contraction is facilitated with rotation and the exercises are introduced once the patient can activate the deep muscles. The patient uses self-resisted isometric rotation in a correct upright sitting posture. They look into the palm of the hand, providing the resistance to facilitate the muscles and perform the alternating rhythmic stabilization exercises with an emphasis on slow onset and slow release holding contractions, using resistance to match about a 10–20% effort. Retraining the strength of the superficial and deep flexor synergy[8]

Retraining the Strength of the Superficial and Deep Flexor Synergy

The head lift must be preceded with CCF followed by cervical flexion to just lift the head from the bed. Gravity and head load provide the resistance. Care must be taken that high load exercise is not introduced too early, as it may be provocative of symptoms.

Adding upper quarter exercises for patients with cervical dysfunction is important in order to integrate ‘global’ muscles that have connections to the cervical spine through anatomical chains (most notably those connecting the axial and appendicular skeletons).

Posture is an indirect measure of the functional status of the neuromuscular system.[11] Postural position is trained in sitting and is corrected from the pelvis. The second aspect of re-education of postural position is the correction of scapular position. Maintenance of a correct scapular position with appropriate muscle coordination has the added benefit of inducing reciprocal relaxation in muscles such as levator scapulae, which reduces muscular pain in the area.

Because CGHs are thought to be a dysfunction of the sensorimotor system.[9] Sensorimotor exercises include progressive exercise on unstable surfaces to promote reflexive stabilization and postural stability. Unstable surfaces such as exercise balls or foam pads can be used to add challenge to the cervical spine as well as the whole-body for stabilization exercises. These final stages of the rehabilitation program for CGH patients can be progressed toward functional activities to return the patient to full participation.

This is composed of different manual approaches, for example, compression, stretching, or transverse friction massage. Pressure release over the sternocleidomastoid muscle TrP is applied and pressure is progressively applied and increased over the TrP until the finger encountered an increase in tissue resistance (tissue barrier). This pressure is maintained until the therapist sensed a relief of the taut band. At that moment, the pressure is increased again until the next increase in tissue resistance. Do this 3x/session. Stretching of the taut band muscle fibers is also important. This technique has been found to be effective for lengthening the TrP in the muscle and the associated connective tissue. The therapist apply moderate slow pressure over the TrP and slides the fingers in the opposite directions. Trigger point manual therapy is applied slowly and is performed without inducing pain to the patients.[21]

These technics were primarily postisometric relaxation procedures (A), myofascial mobilization (B) and selected elements of McKenzie therapy (C). Exercises were mainly applied to the muscles with TrPs, showing the pathological increase in rEMG amplitude. When relaxation of painful, tensed muscles is achieved, the next step of treatment include strengthening exercises of the same muscles. All of them are supervised by a physiotherapist. Exercises intensity shall not increase the pain sensation in the cervical spine, shoulder and girdle muscles. They aren’t supposed to evoke the headache. There are isometric exercises with the gradual loading increase (D) and dynamic exercises (E). Elastic therabands are commonly used during these exercises. Additionally, the self-control exercises of the correct body posture are carried out in front of the mirror relying on the visual feedback (F).[22]