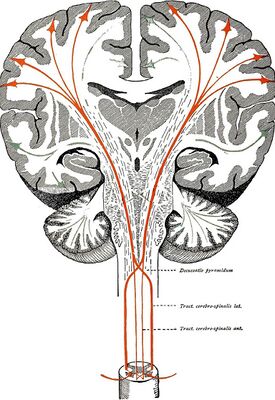 The central nervous system uses ascending and descending pathways to communicate with the external environment. 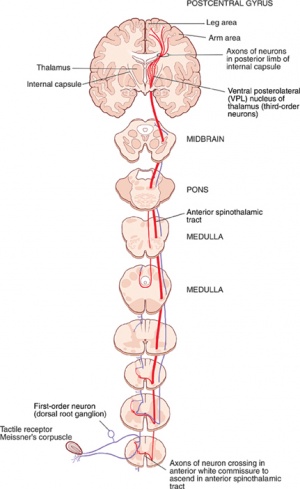 The spinal cord, basically a highway for nerves, streamlines sensory and motor signals to the brain and the body. Information detected by sensory receptors in the periphery is transmitted along ascending neural tracts in the spinal cord. Located in the white matter of the spinal cord, the ascending sensory tracts arise from either the the cells of the spinal ganglia or the intrinsic neurons within the grey matter that receive primary sensory input. There are many sensory tracts and pathways carrying different types of sensory information from the periphery to the cerebral cortex. In humans the major sensory pathways include:

There are many motor tracts in the spinal cord. Some of these are under conscious control and others under unconscious, reflexive or responsive control. These motor tracts can be grouped functionally into Extrapyramidal and Pyramidal tracts

These functional groups contain several anatomical tracts, one for each side of the body:

Carries information from the cerebral cortex to the spinal cord. Also called the pyramidal tract as it is the only point where all the fibres are collected together without contamination by other fibre tracts in the medullary pyramids of the brain stem. Primary motor cortex is the main source of input to this tract, but the premotor and supplementary motor cortex also contribute fibres. Its projections are primarily contralateral and have a strong influence on the activity of groups of spinal motoneurones, which innervate distal muscles of the hands and feet. Most of the fibers, approximately 85%, cross the midline in the decussation of the pyramids in the brain stem and then descend through the spinal cord in the lateral corticospinal tract, while the other 15% cross within the spinal cord at the level they terminate and are carried within the medial corticospinal tract. According to Harvey (2008), the cervical upper motor neurons are centrally located within the corticospinal tract while the lumbar and sacral neurons are peripherally located, which explains neurological patterns of loss seen with certain types of incomplete spinal cord injuries where the peripheral rim of the spinal cord is undamaged.

The corticobulbar tract is composed of the upper motor neurons of the cranial nerves. The muscles of the face, head and neck are controlled by the corticobulbar system, which terminates on motor neurons within brainstem motor nuclei. Contrast this to the corticospinal tract were the cerebral cortex connects to spinal motor neurons, and controls movement of the torso, upper and lower limbs.

There are four tracts[2]. 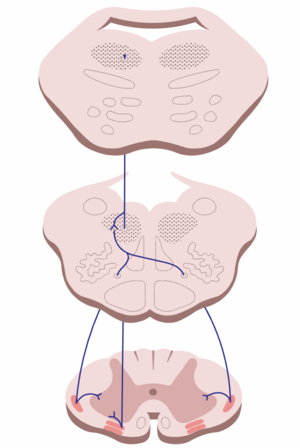 The Rubrospinal tract is a descending pathway, beginning as axons of the neurons present in the red nucleus and terminates by synapsing with the interneurons in the spinal cord.