Buerger's disease or thromboangitis is an inflammatory non atherosclerotic, segmental inflammatory disease affects small and medium arteries and veins of the upper and lower limbs and more common in tobacco use patients, more common in men than women< 45 years but in last decades it is prevalence between women increase may be due to increase in number of women tobacco use. There is a strong association between heavy tobacco use and the development of Buerger's disease[1].

It is believed that  increased tobacco use increase the level of  the inflammatory process in the body, one or more component of the tobacco causes endothelial cell injury, and development of autoantibodies against the cells.

In patients with buerger’s disease we well see markedly elevation in the anti-endothelial-cell antibody (AECA) titers. At buerger's disease this inflammatory process spares all 3 wall layers of the artery and vein, with preservation the integrity of the internal elastic lamina which helping to distinguish thromboangiitis obliterans from atherosclerosis and other vasculitides[2]. 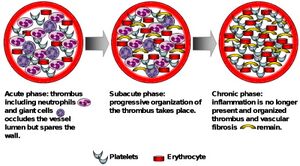 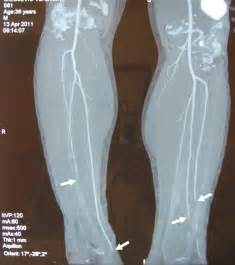 Angiogram for both upper or lower extremities in patients with suspected Buerger's disease.

Vessel biopsy, but it is rarely indicated in patient with older ages and involvement of the large arteries.

Laboratory tests, as there is not any specific laboratory test for the diagnosis of this disease but the laboratory tests are done to exclude other entities that cause occlusive vascular disease such as diabetes, for example CBC, C-RP, ESR.

The first line and corner stone for treatment of buerger's disease is smoking cessation of cigarette or tobacco and in any form plus passive exposure must be avoided. This may help to avoid future amputation, measurements of nicotine and cotinine as a metabolite of nicotine in urine should be performed.

Protective footwear to prevent pressure ulcers, and exposure to cold should be avoided to prevent vasoconstriction.

Prostaglandin analogs such as Iloprost, an effective vasodilator and important for peoples with critical limb ischemia (IV iloprost more effcetive in symptoms management).

Calcium channel blockers such as nifedipine, nicardipine or amlodipine.

For pain relief, analgesic and opiates are often used in these patients. Medications help to control symptoms[5].

Laparoscopic sympathectomy: for lower and upper extremities, it benefits some patients but there is not a guide for patient selection yet.

Amputation: may be used in cases of gangrene or wide spread infection.

Exercise program considered an appropriate treatment and protective method from different PAD. You will find exercises prescription for buerger's disease via this page peripheral arterial diasease.