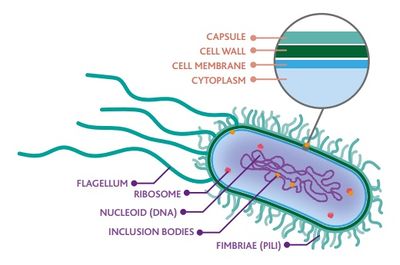 Bacteria are microscopic, single-celled organisms. They are among the earliest known life forms on earth. There are thousands of different kinds of bacteria, and they live in every conceivable environment all over the world[1]. Some are airborne and others are most prevalent in water, soil, plants, animals, and even people.

Many strains of bacteria are harmless and some are even beneficial, such as those found in the human gastrointestinal tract to aid digestion and produce vitamins. There are few (less than 1% of all bacteria types) that cause illness in humans. Some bacteria can be quite dangerous, resulting in salmonella, pneumonia, or meningitis[2].

Bacteria are prokaryotic organisms that carry their genetic information in a double-stranded circular molecule of DNA. Some species also contain small circular plasmids of additional DNA. The cell cytoplasm contains ribosomes and there is both a cell membrane and, in all species except Mycoplasma, a complex cell wall. External to the cell wall, some bacteria have capsules, flagella, or pili. Bacteria normally reproduce by binary fission (see GIF R). Under the proper conditions, some bacteria can divide and multiply rapidly. Consequently, some infections require only a small number of organisms to cause potentially overwhelming infection.

Each species of bacteria has a predilection to infect certain organs and not others. eg. Neisseria meningitidis normally infects the meninges of the central nervous system, it is not, however, a cause of skin infection.

Disease can be caused by the

The immune response is the way in which your body recognizes and defends itself against bacteria, viruses, and other substances that are foreign and harmful. It is the job of the immune system to protect our bodies from harmful invaders by recognizing and responding to antigens. See the Immune System 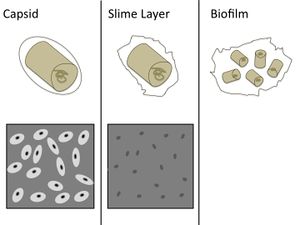 Bacteria have many ways of defending themselves. 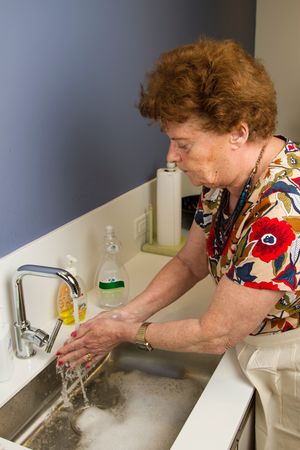 Measures to prevent infection have a dramatic impact on morbidity and mortality. Prevention is especially important in this age of increasing antibiotic resistance, because treatment can be so difficult to achieve.

An example of poor supervision of a preventive measure is illustrated below.

Diagram R: Showing the ways in which antibiotics can disrupt bacterial processes, and the methods of antibiotic resistance bacteria often use.