All health care professionals are aware of this term “Babinski Sign”. It is an essential part of any Neuro-Assessment. As any other procedure, this sign is also topic of debate for a long time. However its use in clinical routine remains unabated.

It was on February 22, 1896, that Joseph Francois Felix Babinski published his first report on ‘reflexe cutane plantaire’ [cutaneous plantar reflex] which became the sign that bears his name: ‘the Babinski sign’.[1]  He referred to the sign as “phénomène des orteils” (toes phenomenon) but is now usually referred to eponymously as the “Babinski sign” or descriptively as the extensor plantar response. 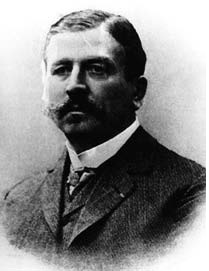 This eponym refers to the dorsiflexion of the great toe with or without fanning of the other toes and withdrawal of the leg, on plantar stimulation in patients with pyramidal tract dysfunction.

The neurophysiology of this reflex has not been completely elucidated.

Instruction to the patient:[edit | edit source]

Place the patient in a supine position and tell him or her that you are going to scratch the foot.

Fixate the foot by grasping the ankle or medial surface with the examiner's hand that will be closest to the midline of the patient: examiner's left hand when the patient's left foot is being tested, and vice versa with the right foot.

The first line to be stroked begins a few centimeters distal to the heel and is situated at the junction of the dorsal and plantar surfaces of the foot. The line extends to a point just behind the toes and then turns medially across the transverse arch of the foot. Stroke slowly, taking 5 or 6 seconds to complete the motion. Do not dig into the sole, but stroke. 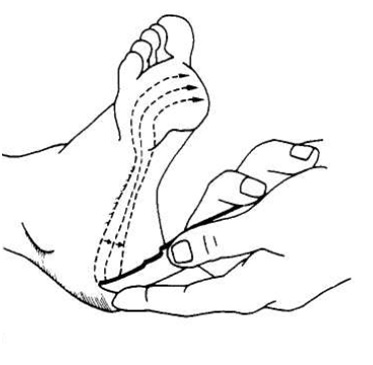 An extensor response may be present when there is no damage to the pyramidal tract.
A possible explanation being the excitation of the distal motor neurons and inhibition of the impulses via flexor reflex afferent nerve fibres can be dissociated because they are mediated by different neurons, however closely linked. [2]
On the contrary, cases with proven damage to the pyramidal system have had normal plantar response.
The corticospinal fibres not only originate in different parts of the cortex, but also have different terminations. Babinski sign can be expected only when ‘leg fibres’ of the pyramidal tract are involved.

The Babinski test along with tests introduced by Chaddock, Gordon, and Oppenheim respectively all test the integrity of the CST.