The autonomic nervous system is a component of the peripheral nervous system that regulates involuntary physiologic processes. It functions without conscious control throughout the lifespan of an organism to control cardiac muscle, smooth muscle, and exocrine and endocrine glands, which in turn regulate blood pressure, urination, bowel movements, and thermoregulation.. The ANS does this by using many diverse chemicals and signals to maintain homeostasis.

The autonomic nervous system operates by receiving information from the environment and from other parts of the body. The sympathetic system is viewed as a quickly responding system that mobilizes the body for action where the parasympathetic system is believed to act much more slowly to dampen responses[3]. 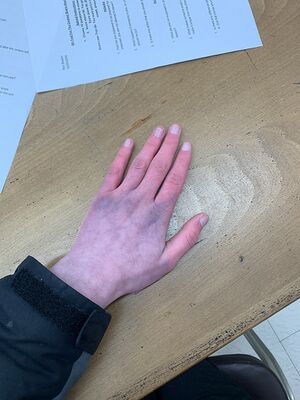 Hand of a person with POTS and dysautonomia exhibiting blood pooling

When the parasympathetic and sympathetic components of the autonomic nervous systems become out of sync, people can experience an autonomic disorder, also called dysautonomia.[3] Dysautonomia is an umbrella term used to describe several different medical conditions that cause a malfunction of the Autonomic Nervous System. The Autonomic Nervous System controls functions of the body that we do not consciously think about. People living with various forms of dysautonomia have trouble regulating these systems, which can result in lightheadedness, fainting, unstable blood pressure, abnormal heart rates, malnutrition, and in severe cases, death. Over 70 million people worldwide live with various forms of dysautonomia. People of any age, gender or race can be impacted. There is no cure for any form of dysautonomia at this time[5]. There are numerous types of autonomic disorders including: Postural Tachycardia Syndrome (POTS); Idiopathic orthostatic hypotension; Multiple system atrophy; Orthostatic hypotension; Postprandial hypotension.[3]