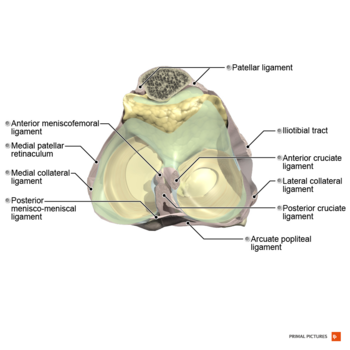 ACL rehabilitation has undergone considerable changes over the past decade. Intensive research into the biomechanics of the injured and the operated knee have led to a movement away from the techniques of the early 1980's characterized by post operative casting, delayed weight bearing and limitation of ROM, to the current early rehabilitation program with immediate training of ROM and weight bearing exercises.

The major goals of rehabilitation of the ACL-injured knee:

After ACL injury, regardless of whether surgery will take place or not, physiotherapy management focuses on regaining range of movement, strength, proprioception and stability.

PRICE should be used in order to reduce swelling and pain, to attempt full range of motion and to decrease joint effusion.

Exercises should encourage range of movement, strengthening of the quadriceps and hamstrings, and proprioception. Consider integrating any of these exercises into a rehabilitation programme at this stage as appropriate for the client:

Also consider taping to provide stability and to encourage reduction in swelling.

RICE and electrotherapy can be applied during several weeks ahead of the surgery in order to reduce swelling and pain, to attempt full range of motion and to decrease joint effusion. This will help the patient to regain better motion and strength after the surgery[2]. The patient must be mentally prepared for the surgery. [3]

Before proceeding with surgery, the acutely injured knee should be in a quiescent state with minimal swelling, have a full range of motion and the patient should have a normal or near normal gait pattern. It is important to prepare the knee for surgery as well as possible to optimise the outcome. To assist pre-operative optimisation, the following guidelines are recommended in the acute and sub acute stages post injury:[3]

Pre-op therapy should encourage strengthening of the quadriceps and hamstrings. Range of motion exercises should be included if there is no pain involved.[4][5] See below for examples of appropriate exercises. 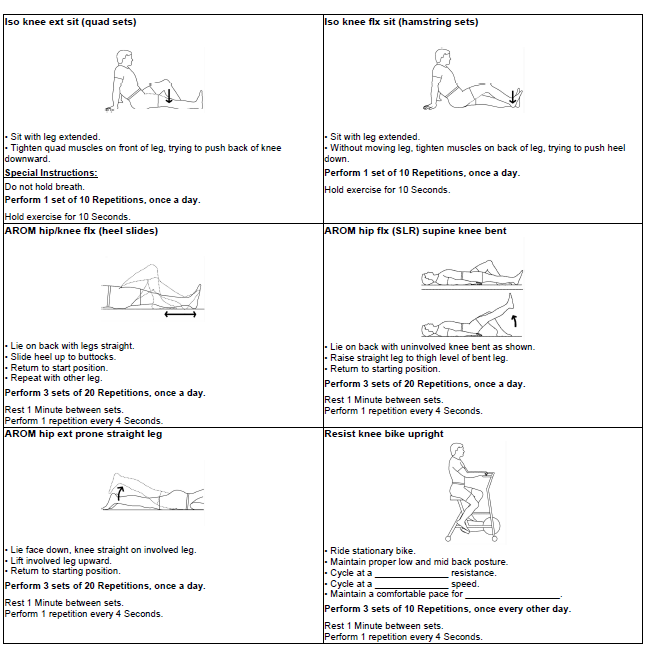 Three factors are important: 1) early terminal knee extension equal to the contralateral side, 2) early weight bearing, and 3) closed and open kinetic chain strengthening exercises. Early knee extension establishes the foundation for the entire rehabilitation program. The incidence of knee flexion contracture with associated quadriceps weakness and extensor mechanism dysfunction following ACL reconstruction has significantly decreased with accelerated knee extension immediately after surgery. Quadriceps strength is enhanced with early extension and weight bearing. The combination of early knee extension, early weight bearing, and closed kinetic quadriceps strengthening allows the patient to progress through the post-operative rehabilitation period at a rather rapid pace without compromising ligamentous stability.[3] Early weight bearing appears beneficial and may decrease patellofemoral pain. Early motion is safe and may help avoid problems with later arthrofibrosis. Continuous passive motion is not warranted to improve rehabilitation outcome in patients and can avoid the increased costs associated with CPM. Minimally supervised physical therapy in selected motivated patients appears safe without significant risk of complications. Postoperative rehabilitative bracing either in extension or with the hinges opened for range of motion does not offer significant advantages over no bracing.[6] The need for postoperative functional bracing and for consensus involving the duration of the bracing in many rehabilitation protocols comes into question. Harilainen et al have compared the effects of functional bracing after ACL reconstruction against not bracing post- operatively. No significant difference in functional outcome, degree of stability, or isokinetic muscle torque was detected at 1 and 2 yrs postoperatively between the two groups. In a similar study, Risberg et al found no significant differences in knee-joint laxity, range of motion, muscle strength, functional knee tests, or pain. [6]

These exercises have a limited role in ACL rehabilitation programs, because research showed that OKC-extension exercises from 60° to 0° flexion, markedly increase anterior tibial translation in the ACL-deficient knee, as well as ACL graft strain in the reconstructed knee.[2]

In short, OKC-extension exercises in ACL rehabilitation programs could be done safe in a ROM from 90° to 60° flexion and are furthermore useful to train the quadriceps isolated.

OKC-flexion exercises play an important part in the rehabilitation process because research showed that there is no anterior tibial translation or ACL graft strain during these exercises. Besides, they result in isolated hamstrings muscle contraction.[8]

A more recent systematic review[11] of RCTs comparing OKC vs CKC exercises in patients post-ACLR has found that:

An ACL injury leads to static and functional instability that causes changes in motion patterns and an increased risk of osteoarthrosis. In many cases, an ACL injury results in a premature end to a career in sports. [18]

Strength and power deficits after surgery may be a risk factor for future injuries and may set athletes up for failure when they try to return to their prior performance levels. Researchers suggest that the surgically repaired leg should perform at least 90% as well as the uninjured leg before you return to sport[20]. Three hopping tests can be used as part of a comprehensive physical and functional examination to help ensure not just a speedy, but a safe return to sport after ACL reconstruction. These3 tests are sensitive enough to measure side-to-side differences and can be used during more advanced recovery phases after surgery to help ensure that the athlete’s exercise program is successful in returning the injured leg at least to the level of the uninjured leg[20].

When Should an Athlete Return to Sport After an ACL Surgery?

Late stage rehab ideas with specifics for the female athlete

In a retrospective, cross-sectional analysis conducted by Culvenor et al.[22]. 30% of patients had patellofemoral pain (PFP) 12-15 months following ALCR using a hamstring graft. Those who were 27 and older were 2.6 times more likely to report PFP. Patellofemoral cartilage lesions, mensical tears (both assessed by arthroscopy), pre-injury activity level, time from injury to surgery and sex were not predictors of post-operative PFP.

Those who hadPFP did not have reduced range of movement but performed worse at hop distance and single leg tasks. Patients also reported significantly lower quality of life, poor returning sport attitudes and increased kinesiophobia.

PFP is important to consider as maladaptive, fear avoidance patterns of movement perpetuate pain and functional disability by lowering pain experience thresholds. The use of appropriate language during rehab and psychosocial interventions are recommended.

In one study there was found no difference in strain on the intact ACL between OKC and CKC exercises. Currently, ACL grafts may respond more like the intact ACL. Therefore they argue, both types of exercise could be done safe[2]. A study that examined the effect of OKC and CKC exercises on functional activity concludes that both open kinetic chain and closed kinetic chain programs lead to an equal long-term good functional outcome[4].In another study, group 1 carried out quadriceps strengthening only with CKC while group 2 trained with CKC plus OKC exercises starting from week 6 after surgery. It seemed that the addition of OKC quadriceps training after ACL reconstruction results in a significantly stronger quadriceps without reducing knee joint stability at 6 months and also leads to a significantly higher number of athletes returning to their previous activity earlier and at the same level as before injury. The authors conclude that the combination of OKC and CKC exercises is more effective than CKC exercises alone[5].

A study that compared the amount of anterior tibial displacement in the ACL-deficient knee during (1) resisted knee extension, an OKC-exercise and (2) the parallel squat, a CKC-exercise, concluded that the ACL-deficient knee had significantly greater anterior tibial displacement during extension from 64° to 10° in the knee extension exercise as compared to the parallel squat exercise[8].There is also a study who concluded that CKC-exercises are safe and effective and offer some important advantages over open kinetic chain exercises.

While bracing remains controversial[6], this video explains the concepts behind the action of a brace to protect the ACL.