Active Release Techniques (ART) are a soft tissue method that focuses on relieving tissue tension via the removal of fibrosis/adhesions which can develop in tissues as a result of overload due to repetitive use.[1] These disorders may lead to muscular weakness, numbness, aching, tingling and burning sensations. ART has been reported to be both a diagnostic and a treatment technique, however, there is little scientific evidence regarding the effects of ART on various pathologies, with most of the available evidence being anecdotal and based on case reports.[2][3][4][5] 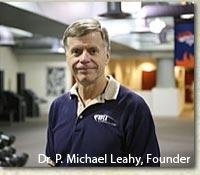 ART was developed and patented by Dr. P. Michael Leahy, DC, CCSP, a Doctor of Chiropractic medicine. Dr. Leahy noticed that the symptoms of patients were related to changes in their soft tissues so he developed this technique which revolved completely around the patient's symptoms. He documented his first work in 1985 under the title of Myofascial Release, but later patented it under the name Active Release Techniques.

ART is used to treat symptoms with muscles, tendons, ligaments, fascia and nerves.[6][7] Its design is 3 fold:

Tissues are prone to negative changes from trauma, such as swelling, fibrosis and adhesions. During treatment, the clinician uses manual therapy to apply compressive, tensile and shear forces to address repetitive strain injuries, cumulative trauma injuries and constant pressure tension lesions.[7] The clinician applies deep tension at the area of tenderness whilst the patient is instructed to actively move the injury site from a shortened to a lengthened position.[4][9] The placing of a contact point near the lesion and causing the patient to move in a manner that produces a longitudinal sliding motion of soft tissues, e.g, nerves, ligaments and muscles beneath the contact point[10].

A few pilot studies reported the effects of ART on different pathologies. These studies do not have a control group however and the group numbers were small.

The pilot study evaluated the effectiveness of ART to relieve short term pain in the management of adductor muscle strains amongst ice hockey players. Pre and post measurements were significant improved, demonstarting that ART was effective in increasing the pain pressure threshold in adductor muscle pain sensitivity, although the study was only short term.[7]

The 20 subjects were significantly more flexible after ART treatment, but the small group sample only included young, healthy males which limits its validity to the general population. It was also only a short term study.[6]

This study assessed the effectiveness of ART on the median nerve of 5 subjects who were diagnosed with carpal tunnel syndrome. Both symptom severity and functional status improved after two weeks of treatment intervention. This is a small clinical pilot study which may suggest that ART is an effective management strategy for patients with the carpal tunnel syndrome.[2]

ART and quadriceps inhibition and strength

ART did not reduce inhibition or increase strength in the quadriceps muscles of the 9 athletes with anterior knee pain. Further research is required.[3]

A patient with trigger thumb appeared to be relieved of his pain and disability after a treatment programme of Graston Technique and ART. 8 treatments were given over a 4 week period. Range of motion increased with a concomitant decrease in pain by the end of the treatment period.[8]


An athlete with chronic, external coxa saltans became asymptomatic following treatment with ART. The patient reported a pain reduction of 50% after the initial session. After the 4th treatment the pain had resolved, although the non-painful snapping sensation was still present. Upon treatment completion, the snapping sensation had also resolved.[1]


A 51 year old male was treated for epicondylosis lateralis with 6 treatments over a two week period with ART, rehabilitation and therapeutic modalities. At the end of the treatment period there was complete resolution of his symptoms.[5]


An adolescent soccer player presented with tibilais posterior tendinopathy. He was relieved from his pain after 4 treatments over 4 weeks of soft tissue therapy and rehabilitative exercises focusing on the lower limb, specifically the posterior tibialis muscle. He had chronic medial foot pain after striking an opponent’s leg whilst kicking the ball.[9]

Once the restrictive adhesions between tissues has been released, post treatment exercises become an essential part of the rehabilitation process to ensure the symptoms do not return.

There are 4 fundamental areas that should be addressed in any exercise program:

ART is effective for active people of every level. It can provide patients with a means to enhance their sports performance by identifying and releasing restrictions that reduce their performance in their chosen activity. This typically occurs after the practitioner conducts a biomechanical analysis of the patient's motion. During the biomechanical analysis and the subsequent treatment, the practitioner:

ART Performance Care is applied after trauma based injuries have resolved. ART Performance Care concentrates upon removing restrictions that inhibit full range of motion, and in restoring full function and performance to affected soft tissues. This process can result in significant increases in sports performance of power, strength, and flexibility.