The Achilles Tendon connects the calf muscles to the calcaneus (heel bone) and is one of the important tendons in the human body. The main action of the achilles tendon is foot plantar flexion. Common pathologies include: tendinopathy, tear or rupture. Examples of mechanisms of injury for rupture includes: falling from a height, forceful plantar flexion of the ankle (as in jumping with an extended knee), or using the foot to break a fall if you stumble[1]. Clinically they present with a palpable gap on palpation, increased passive dorsiflexion, lack of heel raise and a positive Thompson Test[1]. Achilles tendon rupture is either managed conservatively with a cast or surgically with an achilles tendon repair.

For more details on Achilles Tendon Rupture visit this page.

There is much debate in the literature about treatment for achilles tendon rupture with the two options comprising of a conservative or surgical approach. Many studies have shown that the re-rupture rates are higher in cases of non-operative management. More recently studies have demonstrated equivalent or improved rates of re-rupture compare with surgical intervention[2][3]. However, many people continue to be treated with surgical repair and physiotherapists will continue to see them for post-operative rehabilitation in their clinics.

Prior to surgery general oedema reduction interventions should be utilised (Rest, Ice, Compression, Elevation). The surgery will ideally occur within one week of the rupture. 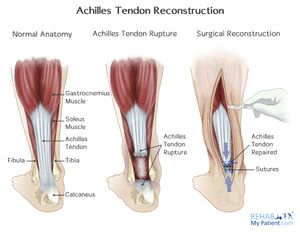 Many techniques exist for this surgery, including transverse, medial and longitudinal incisions. The ankle is placed in neutral position and the severed ends of the tendon are sutured together. The surgeon will then take the ankle through complete range of motion to look at the integrity of the repair. A cast is often applied, with the surgical technique determining how long the cast stays on[4]. Many surgeons are now focusing on early weight bearing and passive motion to improve tendon healing. A new minimally-invasive technique involves utilisation of the peroneus brevis via two para-midline incisions. The technique reportedly preserves skin integrity over the site most prone to breakdown in a vertical incision, open reconstruction.[5] Another study recommended percutaneous repair in the recreational athlete and in patients concerned with cosmesis, and open repair for all high-caliber athletes who cannot afford any chance of rerupture."[6]

Early mobilisation following achilles tendon repair has been reported to be beneficial in terms of postoperative recovery and improved tendon vascularity. Despite the increasing supported for accelerated rehabilitation regimes, there is still no consensus regarding the most preferable protocol. Protocols have been developed by Brumann et al[7] and Braunstein et al[8]

Goals of this phase are as follows:

Phase I interventions include:

A recent systematic review by Brumann and colleagues (2014)[9] identified the most up-to-date rehabilitation protocol for an achilles tendon repair. They summarised their findings with the following guidelines;