Timed Up and Go Test (TUG) 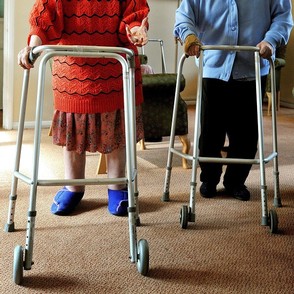 To determine fall risk and measure the progress of balance, sit to stand and walking.

Note: A practice trial should be completed before the timed trial

An older adult who takes ≥12 seconds to complete the TUG is at risk for falling.[3]

Cut of scores indicating risk of falls by Population (in seconds)

Cut-off times to classify subjects as high risk for falling vary based on the study and participants.

Previous studies have shown that people with Parkinson's can show gait changes like a decrease in walking speed, step length and pattern. These changes are due to a decrease in automaticity and attentional flexibility. People with Parkinson's are at a higher risk for falls because when performing dual tasks they "prioritize concurrent tasks over postural tasks". [12]

In a retrospective study of 36 participants with PD, participant who reported falls in the last 6 months were compared to participants who reported no falls. In this study the optimal cut off times to discriminate between fallers and non-fallers with Parkinson's were as follows:[12]

A cross-sectional quantitative study investigating the effects of age-related visual dependence on motor performances (turning cadence; gait speed) under increased attention demands by adding a motor task and visual stimulus to the Timed Up and Go (TUG) test sub-components demonstrated significant performance differences in the TUG test tasks due to age and visual dependence[14].