Treacher Collins syndrome (TCS) is a rare condition. Babies who have it are born with deformed ears, eyelids, cheekbones, and jawbones. There is no cure, but surgery can make a big difference. The condition is caused by an abnormal gene that affects how the face forms. Hearing loss is common.[1] Other names for this syndrome are mandibulofacial dysostosis, Treacher Collins-Franceschetti syndrome, Franceschetti-Zwahlen-Klein syndrome, and zygoauromandibular dysplasia. 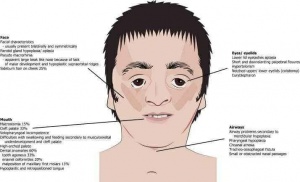 Signs and symptoms vary from almost unnoticeable face changes to severe facial and ear alterations, cleft palate and restricted airway. While some individuals may experience very mild symptoms, others have extremely severe symptoms that may have serious consequences, such as life-threatening airway problems.

Signs and symptoms of TCS include some parts of the body developing in abnormally or incompletely. These body areas include:

Hearing loss may occur due to abnormal development of the facial bones and incomplete or abnormal development of the ears. TCS may also cause a delay in motor and speech development. This condition can make it hard to breathe, sleep, eat, and hear. Problems with the teeth and dry eyes can lead to infections. Life can be hard for people with TCS. The deformities may lead to problems in family and social relationships.

TCS is caused by mutations in one of three genes:

A diagnosis of TCS is made based on the following:

After the initial diagnosis, other tests can help determine the severity of TCS. Doctors may examine the following:

TCS can’t be cured. And no one treatment is best for everyone who has it. That’s because each case is different. It depends on the problems your child has or may have in the future. Care will usually involve several different health professionals, such as:

For newborn infants with TCS, treatment will include procedures for improving breathing and how the airway works. Methods include special positioning of the infant and making an opening in the windpipe. Doctors can treat hearing loss caused by TCS with hearing aids, speech therapy, and integration into the education system. Surgeons can correct or rebuild the following areas if they are affected by abnormal or incomplete development:[6]

The age of the person will affect what surgery a doctor will recommend.[4] Repairs of the roof of the mouth are often carried out at 1–2 years of age. Cheek, jaw, and eye socket rebuilding is often done at 5–7 years of age. Ear corrections are usually made after 6 years of age. Jaw repositioning is typically done before 16 years of age. Other potential treatments are still under investigation, and no scientific results have yet been confirmed. They include:

Genetic counselling may also be suggested for individual people with TCS or the whole family if the syndrome was inherited. At these meetings, people will learn about the outlook for a genetic disorder, and experts will advise them about what the chances are of passing the condition on.

Usually, people with TCS grow to become functioning adults with normal intelligence. With proper management, life expectancy is approximately the same as in the general population. In some cases, the prognosis depends on the specific symptoms and severity of the affected person. For example, very severe cases of TCS can cause perinatal death because of a compromised airway.