The purpose of this fictional case study is to investigate the efficacy of Rhythmic Auditory Stimulation (RAS) as a treatment for gait abnormalities in older age adults with Parkinson’s Disease . The case study is focused around a client who has mild to moderate PD symptoms who seeks physiotherapy to increase his gait speed, walking distance and overall independence for his basic activities of daily living (ADLs). RAS is a treatment technique for Parkinson's patients, which is designed to improve gait by providing the patient with auditory cues throughout gait[1]. This intervention was implemented 4 days per week (Monday, Tuesday, Thursday & Friday) for a total of 8 weeks; these gait training sessions were 30 minutes in length and were embedded within 90-minute rehabilitation sessions. The physiotherapy treatment plan was developed after consulting with the patient to create goals and assessing his function using a variety of validated outcome measures, such as the Unified Parkinson’s Disease Rating Scale (UPDRS), Timed Up and Go Test (TUG), Berg Balance Scale (BBS) and Mini Balance Evaluation Systems Test (Mini-BEST). After the 8-week intervention, the patient experienced mild improvements in gait and balance; he improved from 42 to 45 on the BBS, from 19 to 23 on the Mini-BEST, from 18 to 15.5 seconds on the TUG, and from 39 to 34 on the UPDRS Part III. Although these improvements are not statistically significant, they are changes that we would expect to see within an 8-week rehabilitation program. These outcomes are meaningful in the sense that we were able to see progress in the right direction with this PD patient.

Mr. Brown is a 75-year-old man who was diagnosed with PD, a progressive neurodegenerative disease of the central nervous system (CNS) affecting both motor and cognitive systems[2][3]. Specifically, Parkinson's is a disorder which is characterized by the loss of dopaminergic neurons in the substantia nigra and basal ganglia consequently diminishing motor function and causing non-motor symptoms[4]. Typical symptoms include bradykinesia, akinesia such as freezing, rigidity, resting tremor, postural instability, decreased dexterity and masked facial expression[5]. Other symptoms may include mild cognitive impairment and potentially more extreme impairments such as dementia[2][3]. The objective of this case study is to demonstrate the efficacy of RAS as a treatment for bradykinesia and decreased gait speed in patients with PD. Similar cases that would be relevant to this case study would include Parkinson's in older-aged adults who want or need to improve balance, gait pattern and gait speed.

Mr. Brown is a 75-year-old man who was diagnosed with Parkinson’s Disease 5 years ago, with a recent worsening of symptoms. He has been on Levadopa for the past 2 years and presents with bradykinesia, rigidity and resting tremor in his left upper extremity. Upon examination of gait, Mr. Brown demonstrates reduced speed and amplitude of movement and requires the use of a cane during winter months. Mr. Brown currently lives alone on the first floor of a condominium in Toronto, Ontario, Canada, and is independent with his ADLs, but complains that it takes him a long time to complete few tasks throughout the day. His primary reason for seeking help from physiotherapy is to increase his gait speed, walking distance and improve gait pattern so that he is better equipped to complete his ADLs as he ages.

Mr. Brown is a retired University of Toronto Chemistry professor who lives alone on the first floor of a condominium. He is currently independent with all ADLs, however, activities take him a long time to complete. He has a grandson who lives nearby to help him with any tasks he needs. Mr. Brown enjoys meeting friends for coffee, however, he explains he has recently stopped attending because it takes him way too long to walk to the coffee shop. The patient reports that he feels slightly unstable while walking, and becomes very frustrated with his slow walking speed.

Mr. Brown demonstrated evidence of bradykinesia throughout active ranges of motion (AROM) across several joints in the upper and lower extremities. His AROM included the following:

Mr. Brown’s performance of rapidly alternating movements of his upper and lower limbs were also evaluated. When asked to bring his finger to his nose repeatedly, he demonstrated diminished amplitude over time, as well as more irregular temporal and spatial performance of the task. Repetitive closing of the hands, finger tapping, and foot tapping were performed at a reduced amplitude and velocity with worsening progression after a few repetitions. These movements indicate fatigable weakness in the hands and feet.

Functional Mobility / Gait: Mr. Brown experiences moderate irregularities in his gait, such as decreased step length bilaterally, decreased speed and decreased arm swing (particularly on the left side). He also exhibits festination and has akinesia (freezing) that gets worse when turning towards the left. His TUG score was 18 seconds on initial assessment (indicates an increased risk of falls).

Mr. Brown is a 75-year-old male who presents with impaired motor function and coordination, with resting tremor and rigidity that mostly affects the left non-dominant side. He presents with a slow and irregular gait pattern but has independent functional mobility and activities of daily living.

It has been identified in numerous studies that Rhythmic Auditory Stimulation (RAS) is a viable gait therapy technique in patients with Parkinson’s Disease[6][7][8]. In a study by Thaut et al. (1996)[6], patients with Parkinson's who trained with RAS over 3 weeks showed a significant improvement in gait velocity and step cadence. RAS is believed to use several auditory-motor pathways that respond to rhythmic time information to stabilize motor control, which in turn enhance gait performance in Parkinson patients[7]. Additionally, training with RAS over 8 weeks is shown to improve balance[8] and reduce freezing of gait in patients with PD[9].

Alongside training with RAS, other treatments include hydrotherapy, which has shown to have a positive effect on UPDRS part III[10], as well as assisted active range of motion (AAROM) for maintaining mobility, and general strengthening using the American College of Sports Medicine (ACSM) endurance training guidelines to maintain muscles mass and strength. 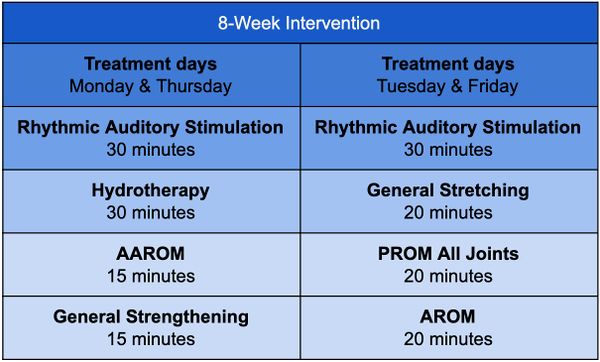 Implementing RAS into an 8-week rehabilitation program for patients with Parkinson's Disease.

Mr. Brown’s BBS total score improved from 42/56 to 45/56, which indicates that he is experienced a slight improvement in balance[11]. His Mini-BEST score improved from 19/32 to 23/32, which once again demonstrates a small improvement in his balance[12]. The TUG test time improved from 18 to 15.5 seconds, indicating that he may have a slightly lower fall risk compared to the initial assessment[13], and the UPDRS Part III score decreased from 39/84 to 34/84, indicating a slight improvement in the motor aspects of his symptoms[14]. Note: The above changes are not statistically significant or represent a minimal detectable change, but we would not expect to see drastic changes within the initial 8 weeks of a rehabilitation program. Additionally, Mr. Brown’s progression in rehabilitation is heading in the right direction, especially considering his age and the fact that Parkinson’s Disease is a progressive neurological disorder. After Mr. Brown’s 8-week intervention, a referral was made for outpatient community-based physiotherapy, where he can continue to seek rehabilitation.

Applying the rhythmic auditory physiotherapy intervention has helped the patient, Mr. Brown, to reduce the functional regression as a result of Parkinson’s Disease. Although the 8-week protocol did not allow Mr. Brown to regain his full independence, it did provide a small positive impact on his overall quality of life as measured by our selected outcome measures. These improvements did not show statistically significant, but did demonstrate a positive correlation between rhythmic auditory physiotherapy and exercise interventions on gait speed and pattern[15]. This case study has clinical implications for Parkinson populations and as well as their corresponding health care providers who are looking to improve patient gait and functional independence. This case provides examples of the assessment, outcome measures and treatments used for what was designed to be a typical case of mild-moderate Parkinson’s in a senior male. While this case study is not designed to be prescriptive, it offers several suggestions and guidance for physiotherapy interventions for a Parkinson’s patient seeking to improve gait.