Tendons are situated between bone and muscles and are bright white in colour, their fibro-elastic composition gives them the strength require to transmit large mechanical forces. Each muscle has two tendons, one proximally and one distally. The point at which the tendon forms attachment to the muscle is also known as the musculotendinous junction (MTJ) and the point at which it attaches to the bone is known as the osteotendinous junction (OTJ). The purpose of the tendon is to transmit forces generated from the muscle to the bone to elicit movement. The proximal attachment of the tendon is also known as the origin and the distal tendon is called the insertion.[1]

Tendons have different shapes and sizes depending on the role of the muscle. Muscles that generate a lot of power and force tend to have shorter and wider tendons than those that perform more fine delicate movements. These tend to be long and thin. [2]

The tendon cells are known as tenoblasts and tenocytes. They make up approximately 90-95% of the cells within the tendon. The other 5-10% include the chondrocyctes, synovial cells and the vascular cells.[1]

Tenoblasts are immature tendon cells. Initially they are different in size and shape but as they age they become elongated and spindle shaped and transform into tenocytes. The tenocyctes are responsible for the turnover of maintenance of the extracellular matrix (described below). The tenocyctes respond to mechanical load of the tendon and thus make adaptations. They are arranged in longitudinal rows and have extensive communication with adjacent cells usually through gap junctions.[1][3]

Gap junctions are very complex and complicated structures. They have two hemi-channels. These are also called connexons (a collection of six connexin protein subunits). These have a central pore. The connexons in an open state allow metabolites and ions to pass freely between the gap junctions. The connexins are numbered, the ones which we are interested in for cell communication and tendon regeneration are connexins 26, 32 and 43.[4][5][6]

Connexin 43 is situated in gap junctions between cells in rows along the collagen fibres. Connexins 26 and 32 have a more diffuse pattern. Connexin 43 is responsible for the inhibition of the collagen syntheses within the tenocyctes as a response to mechanical loading. Connexin 32 may have a stimulatory role, but all we need to know is that they aid communication between cells within the tendon to help with regeneration and adaptation. [7]

The orientation of the collagen fibres in tendons have been found to run; parallel, simply crossing, crossing of two fibres with one straight, a plait formation of three fibres and an up typing of two parallel running fibres. The orientation and organisation of collagen fibres differs from tendon to tendon and vary in location of the tendon. This is dependent on the requirement of each tendon. For example tendons that need to resist rotational tensile forces will have a collagen fibre orientation to enable this. [9]
The collagen molecules consist of polypeptide chains, three of these chains combined together form a densely packed helical tropocollagen molecule. Five of these combined together form a microfibril. The microfibrils then aggregate together to form fibrils. These are then grouped into fibres and fibres into fibre bundles and then into fascicles.

The fascicles are small in diameter in the young but as they mature into you adulthood they grow in size, peaking in size between the ages of 20-29 years old. As the tendon progressively ages the diameter becomes smaller, this has been linked to a possibility in the decreased strength of the muscle. It has also been noted that the diameter can shrink in size if the tendon becomes injured. [2][3]

Vascularity of a tendon is very important when considering the healing process. Blood supply from tendons can be split into two sources; the intrinsic and the extrinsic. The intrinsic sources are at the MTJ and the OTJ, while the extrinsic are at through the paratenon or the synovial sheath.The blood supply to specific areas are supplied by different sources. The intrinsic at the MTJ has been documented to extend into 1/3 of the tendon whereas the bloody supply originating from the OTJ is more avascular and is limited to the insertional point. This leave the extrinsic source to supply the mid portion of the tendon. [10]

Studies have shown that tendons have significantly reduced vascularity around bony pulleys. A connection has been made between tendons that can be compressed at multiple locations (between the MTJ and the enthesis) and common sites of degeneration and / or rupture. [11]

The innervation of tendons start from cutaneous, peritendinous and muscular nerves. At the MTJ nerve fibres cross and enter the endotenon and the paratenon. These fibres then enter and innervate the epitenon. The majority of the nerve fibres terminate and reside on the surface of the tendon. The nerve endings can be categorised into myelinated and unmyelinated. The myelinated nerve fibers are specialized mechanoreceptors (Golgi tendon organs) sensing tension and pressure in the tendon. These tend to be located close to the muscle. The unmyelinated fibres are responsible for sensing and transmitting pain (nocioceptors). [12][13]

The structures surrounding the tendon can be split into 5 subcategories. The main aim of these structures is to reduce friction and enable the tendon to glide smoothly. This is an important factor for ensuring the transitions of the force is at its most efficient. These structures are: 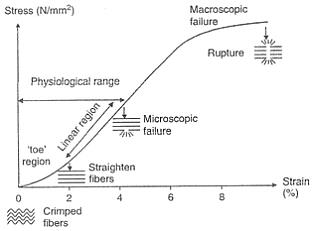 The tendons’ main role is to transmit forces from the muscle to the bone and absorbs external forces to prevent injury to the muscle. As the tendon runs from a very compliant tissue (the muscle) to a ridged stiff one (the bone), this role can become very difficult, this can result in strain concentrated at the site of merging tissues. This can be a common site of injury.

The make up of the tendon is now not thought to be the same throughout, research has discovered that the tendon itself may be more ridged in some parts and more compliant and elastic in others to overcome this concentration of strain and risk of injury. Each tendon will differ throughout the body depending on the rate in which they are strained. The behaviour of the collagen within the tendon depends on the intramolecular types, quantity and bond.

The tendon collagen fibres at rest are now thought to be organised in a crimped patter, when the tendon is put under strain of up to 2%, the fibres and fibrils are thought to flatten. Any further the fibres are said to be pulled into a more parallel and linear pattern.
If the strain remains lower than 4% the fibres and fibrils have been shown to recoil back to their normal resting state but strain greater than 8-10% there is evidence to suggest that microscopic damage occurs. As the strain on the fibrils continues the gap between the molecules increases and when the recoil they do not slip back into their normal alignment they can become disorganized, tangled and bunched. [14][3]