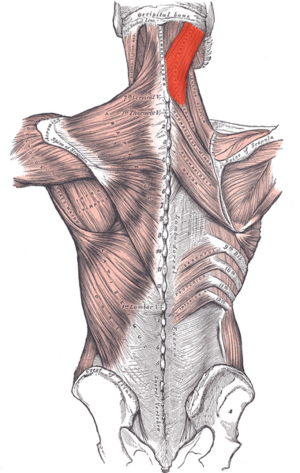 Splenius capitis is a thick, flat muscle at the posterior aspect of the neck arising from the midline and extending superolaterally to the cervical vertebrae and, along with the splenius cervicis, comprise the superficial layer of intrinsic back muscles.[1]

In relation to its surrounding musculature, it sits:

Lateral branches of the posterior rami of the middle and lower cervical spinal nerves.[1]

Muscular branches of the occipital artery from the external carotid artery.[1]

Splenius capitis assists in supporting the head in the erect position.[1]

Dysfunction of splenius capitis may be found in those with mechanical chronic neck pain[2] or whiplash disorders.

The American Physical Therapy Association (APTA) revised the clinical practice guidelines in 2017. Briefly; for patients with chronic neck pain (with radiating pain), mechanical intermittent cervical traction, combined with stretches and strengthening exercises and cervical/thoracic mobilisation/manipulation have shown to have a positive effect.[3]