Sjogren's syndrome was first described by physician Henrik Sjogren in the early nineteen hundreds to explain the signs and symptoms of a group of women exhibiting chronic arthritis along with extremely dry eyes and dry mouth[1]. It is now understood that Sjogren's syndrome is an autoimmune connective tissue disease in which the body's own immune system attacks moisture-producing glands, causing inflammation in addition to a reduction in both the quality and quantity of the glands' secretions[1]. As observed by Dr. Sjogren, the glands responsible for producing saliva and tears, the salivary and lachrymal glands respectively, are the organs most notably impacted by the disease[2]. However, Sjogren's syndrome is a systemic disorder in which many organs may be affected, including kidneys, gastrointestinal tract, blood vessels, respiratory tracts, liver, pancreas, and central nervous system[3]. Additionally, it is considered a rheumatic disease, like rheumatoid arthritis or lupus, and similar to these diseases Sjogren's syndrome can cause inflammation in joints, muscles, skin, and other organs[2].

Sjogren's syndrome is the second most prevalent autoimmune rheumatic disease. In 2008, it was estimated that 1.3 million Americans were affected[2][3]. Statistics from rheumatology clinics indicate that Sjogren's syndrome affects 0.5 - 1% of the general population and approximately the same number of people have been diagnosed with Sjogren's syndrome and Systemic Lupus Erythematosus[4].

Although, it can affect individuals of all genders and ages, including children, symptoms usually occur in women between the ages of 45 and 55 years old[1]. In fact, it is estimated that nine times as many women are affected when compared to men[3]. Among individuals with rheumatoid arthritis or systemic sclerosis, thirty percent have histological evidence of Sjogren's syndrome[3]. 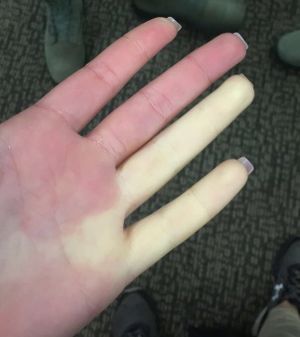 Patients with Sjogren's syndrome (SS) can present with a number of complaints. However, the most common symptoms of this autoimmune disease are dry mouth and dry eyes. These complaints may be considered mild in comparison to the symptoms commonly associated with other autoimmune diseases, such as rheumatoid arthritis. However, the dry eyes and dry mouth associated with Sjogren's syndrome can be quite severe. In SS, the extreme dry eyes is called keratoconjunctivitis sicca (KCS)[4], and individuals may describe it as a dry, burning, or gritty feeling, as though they have sand in their eyes[1][3]. The excessive dryness in the mouth, also known as xerostomia[4], may make it difficult to speak, swallow, chew, or it may make foods taste differently[3].

While these are the hallmark signs of Sjogren's syndrome, 40 to 60 percent of individuals with primary SS will develop extra-glandular problems[4]. A patient may present with a number of other complaints including:

Approximately half of the patients who have been diagnosed with Sjogren's Syndrome have also been diagnosed with rheumatoid arthritis, lupus, or some other connective tissue disorder[1]. Fewer people may also experience Sjogren's in association with lymphoma[1].  As more research is developed on the topic, more and more co-morbidities are being associated with SS. Recent studies suggest that clinical depression is also common among individuals diagnosed with this disease[2].

Secondary Sjogren's is a form of the syndrome which develops after the presentation of a primary disease, usually another autoimmune connective tissue disease[2]. Common primary diseases associated with Sjogren's Syndrome are listed in the table below.

There is no cure for Sjogren's syndrome, therefore its symptoms are managed through medications, both prescription and over the counter. A variety of  medications may be used to treat each of the associated symptoms.

This table was created using information from the National Institute of Arthritis and Musculoskeletal and Skin Diseases[2] and PubMed Health[5], see references below.

Diagnosis of this disease is based on medical history, a physical exam, and results from some clinical and laboratory tests[1][2][3]. Due to the nature of the disease in that the symptoms are similar to other diseases and they appear gradually over time, it may take years for Sjogren's to be properly diagnosed[2]. Nonetheless, diagnostic testing may include the following: 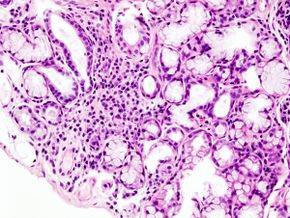 Because dry eyes and dry mouth are common symptoms and side effects of a number of diseases and treatments, including radiation to the head and neck, the physician will commonly perform a battery of additional tests to confirm no other causes. These tests may include:

(The above table was adapted from Table 2 in Vitali C, et al. Classification criteria for Sjogren's syndrome: a revised version of the European criteria proposed by the American-European Consensus Group. Ann Rheum Dis 2002;61:554-558. See references below.)

(The above table was adapted from Table 3 in Vitali C, et al. Classification criteria for Sjogren's syndrome: a revised version of the European criteria proposed by the American-European Consensus Group. Ann Rheum Dis 2002;61:554-558. See references below.) 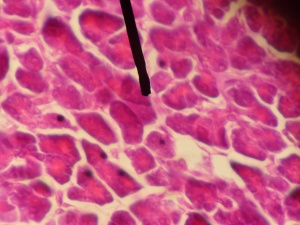 Digital camera shot of human acinar cells through a microscope.

The primary symptoms of Sjogren's syndrome, including the dry eyes and dry mouth, are a result of the destruction of the exocrine (lacrimal and salivary) glands by focal T-lymphocytic infiltrates[3]. T-cells and B-cells are components of the immune system and usually work together to destroy foreign structures in the body, such as viruses and bacterias. However, in autoimmune diseases, such as Sjogren's syndrome, these cells interfere with the function and structure of organs within the body. In the case of Sjogren's, these cells interfere with glandular function[3].

Regulation of the salivary glands by the nervous system is impaired, and the secretory acinar apparatus displays structural abnormalities[3]. The acinus is the terminal end of the exocrine gland where the secretions are produced. The membrane of this structure lacks the laminin alpha-1 chain, which may explain this organ's inability to induce differentiation of the stem cells into acinar cells[3].

Evidence in the pattern of cases suggests that the cause of Sjogren's syndrome has a genetic component[3]. Recent research has found that the same gene variant commonly present in individuals with other connective tissue diseases, such as RA and lupus is also associated with Sjogren's syndrome[2]. The discovery of the STAT4 gene variant in association with autoimmune diseases could lead to a number of cutting edge treatments[2], including the possibility of gene replacement therapy to combat these incurable conditions.

As with other autoimmune diseases, scientists believe that Sjogren's may be triggered by an infection in individuals with a genetic predisposition[2]. This infection jump-starts the immune system. However, instead of calming down when the infection is eradicated, the immune system continues to remain on high alert and starts to destroy the body's own cells.

Individuals with Sjogren's syndrome are prone to a number of problems such as inflammation and infection throughout the body. These issues may include[3][2]: 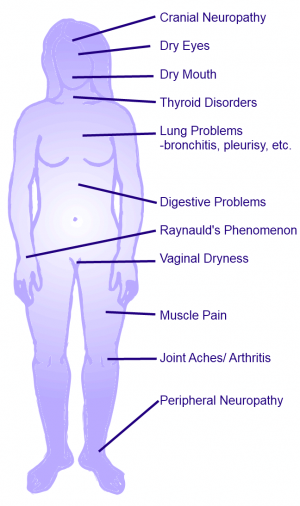 Common medical practice revolves around medication to treat Sjogren's syndrome. Specifically, physicians aim to control the dry eyes using substitute topical agents and manage extra-glandular symptoms with glucocorticoids and immunosuppressive drugs[7]. Many of these pharmaceutical therapies can be seen in the Medications section of this page.


Current evidence does support frequently using preservative-free tear substitutes to treat dry eyes during the day and using the ocular lubricating ointment at night[7]. The ointments are not suggested for day time use secondary to the application producing blurred and cloudy vision. The treatment recommended to a patient may depend upon the severity of the patient's symptoms. To treat moderate to severe dry eyes associated with Sjogren's syndrome, controlled trials support the application of topical 0.05% cyclosporine two times a day[7]. Topical NSAIDs or glucocorticosteroids may be required for the patients suffering from severe refractory ocular dryness[7]. In extreme cases of severely dry eyes, a patient may elect to undergo a punctual occlusion. This is a surgical procedure that attempts to keep the natural tears over the surface of the eye by closing the tear ducts that drain said tears from the eye[2].


For patients experiencing mild to moderate dry mouth, studies support the use of saliva replacement products and/ or sugar-free gum[7]. Along with the use of such products, it is suggested that individuals practice thorough oral hygiene whilst avoiding smoking and alcohol consumption[7][2]. Oral pilocarpine and cevimeline are the preferred treatments for patients who have maintained residual salivary gland function, however, these two drugs have not yet been tested in a comparison study to determine which is more effective[7]. Recommended daily doses are as follows:

If a patient presents with contraindications for these therapies or is not tolerant of these medications, it has been found that N-acetylcysteine is an acceptable alternative[7].

The studies supporting the use of glucocorticoids and immunosuppressants have been small providing limited evidence for the prescription of such therapies. However, Rituximab has been shown to improve some extra-glandular symptoms, including vasculitis, neuropathy, glomerulonephritis, and arthritis[7].

Individuals with Sjogren's syndrome have reduced physical capacity and tend to fatigue very easily. While research on the effects of exercise on individuals diagnosed with Sjogren's is limited, the available studies suggest these patients benefit from moderate to high-intensity levels of exercise[3]. This type of activity has a positive influence on aerobic capacity, fatigue, physical function, and mood.


Further research is required to understand the effects exercise may have on individuals with varying severities of this disease, and to determine the long-term effects exercise may have on their symptoms[3]. However, some of the musculoskeletal presentations of SS are muscle and joint pain, along with arthritis. Thererfore, a patient may be treated by a physical therapist to relieve these symptoms[8].

There are also several things a patient can do at home in order to manage his or her symptoms. These may include[2]:

There are several diseases that present with symptoms similar to Sjogren's syndrome, including the dry eyes and dry mouth3. Some differential diagnoses include: