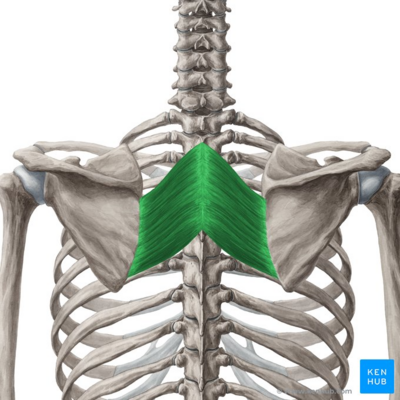 The Rhomboids are two muscles - Rhomboid Major & Rhomboid Minor. The two rhomboids lie deep to trapezius to form parallel bands that pass inferolaterally from the vertebrae to the medial border of the scapula. Rhomboid Major is thin and flat and twice as wide as the thicker Rhomboid Minor which lies superior to it.

The rhomboids are important in upper limb movement and stability of both the shoulder girdle and scapula. Both rhomboids receive innervation from the dorsal scapular nerve and supplied by the dorsal scapular artery. Variants in rhomboid musculature have been found but are very rare. Winged scapula and rhomboid palsy are clinical pathologies associated with the rhomboids.[1]

The rhomboids consist of two separate muscles; the major and minor muscles which are found immediately deep to the trapezius.

Image 2: Rhomboideus minor and rhornboideus major of right side: outline and attachment-areas.

The 30 second video below in on the Rhomboids anatomy. 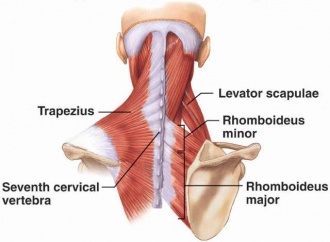 The motor function of the rhomboid muscles is controlled by the dorsal scapular nerve (DSN). The DSN originates from the ventral ramus of the spinal nerve root C5, and courses posterior inferiorly through the middle scalene muscles and between the posterior scalene, levator scapulae (to which it also provides innervation), and the serratus posterior superior. It continues deep to the brachial plexus to innervate both the rhomboid minor and major muscles at their anterior border[1] 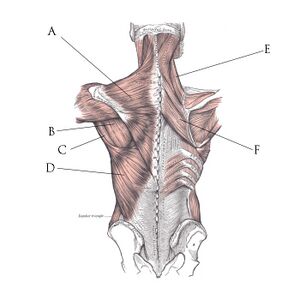 The rhomboid major and minor are a group of deep intrinsic shoulder muscles that together with the sternocleidomastoid, trapezius, pectoralis muscles, latissimus dorsi, and serratus anterior, form the shoulder girdle. This group of muscles is important for movement of the upper extremity and stabilization of the shoulder through articulation with the trunk.

Functionally, the rhomboid muscles retract, elevate and rotate the scapula. They also protract the medial border of the scapula, keeping it in position at the posterior thoracic wall.

The etiology of rhomboid injuries are usually posture related eg in correct shoulder placement when playing sports, carrying heavy objects, thoracic hyperkyphosis, forward head posture, upper crossed syndrome. Those who do not exercise regularly find that muscles like the rhomboid muscle become weak and more susceptible to strains and tears. [5]

Palpated together. The rhomboids are covered by trapezius so you need to relax trapezius by placing hand in small of back. Palpate along vertebral border by placing fingers under it. Have patient lift hand off back (with resistance if needed) and the rhomboids push fingers out.

Take a look at the videos for examples of treatment techniques.