Theoretically speaking, popliteus tendinopathy, also known as popliteus tendon tenosynovitis is a gap in the tendon of the popliteus. Popliteus is quite an uncommon pathology which often occurs in athletes and people with a history of other knee ligament injuries after trauma. It is a relatively unusual condition in non-athletes without a history of Knee traumas. 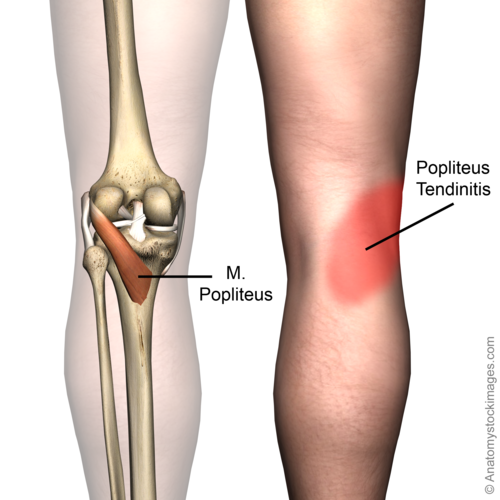 Popliteus tendinopathy may be caused by overuse of the popliteus muscle-tendon unit. It usually occurs in athletes who run or train on hills or banked surfaces.[4] Common causes are either a direct varus force, while the tibia is externally rotated, or a sudden forced knee hyperextension with the tibia internally rotated[1][5][6] It may also be associated with hyperpronation of the foot because this causes an external rotation of the tibia[7].

You can recognize a popliteus tendinopathy to the acute pain that occurs at the posterolateral part of the knee joint.[8][9] This can be accompanied bn inflammation, acute onset of pain, locazised swelling, redne,ss and marked tenderness over the lateral side of the knee, at the insertion of the popliteus tendon.[9] Also, the area around the popliteus tendon (from the fossa popliteal to the outside of the knee joint) will be very sensitive and painful. A crackling sound (crepitation) when the tendon is moved is also generally heard.[10]
Because of the muscle spasm, there will be a painful resisted knee flexion (15-30°) or internal rotation and the knee cannot be fully extended.[9][10] If the patient continues to load his knee, symptoms will get worse and scar tissue can form, which can make physical activity even more painful[1][6][11]. Physical activities like walking, running and going up stairs, can be hindered especially shortly after the injury is sustained. Downhill running or walking will therefore cause increased stress on the popliteus muscle-tendon unit in an effort to decelerate the body weight, with tenosynovitis and exacerbated symptoms as a result.[12] Popliteus tendinopathy is often diagnosed in professional runners and triathletes.[1][13] It is highly unusual for this injury to present itself in a non-athletic person without a history of knee trauma.[1]

The diagnosis should largely be established following a careful analysis of the case history and a thorough physical examination. Usually, patients have symptoms that include tenderness along the course of the proximal popliteus tendon and pain with resisted external rotation.

The differential diagnosis of reported posterior knee pain should always include an intra-articular pathology, such as a posterior horn tear of the meniscus.

Other pathologies that may cause similar symptoms as popliteus tendinopathy are:


MRI scan or other radiography can be used to diagnose tendinopathy. In a case study, we found finding of an unusual amount of fluid related to the popliteus sheath but the tendon seemed to be intact with no soft tissue injury.[1][15]

To objectively determine the baseline function of the patient at the beginning of the treatment and to determine progress and efficacy of treatment efficacy we evaluate the patient by testing his mobility and his force.


In the beginning, the patient experiences acute pain during testing. As a result, most movements in the knee are limited especially the flexion of the articulation. The patient is unable to do weight-bearing exercises on his affected side.[1] There is also pain during resisted external rotation.[16]


The progress of the patient and the effectiveness of the therapy can be measured by using the patient-specific scale or the lysholm score before, during, and after the treatment.

It is important that popliteal tendinopathy is correctly diagnosed. If misdiagnosed it can limit athletes’ performances and lead to surgery.


The diagnosis is established by assessing carefully the case history and by a physical examination[14].


Popliteus tendinopathy causes lateral knee pain. During the examination, patients present tenderness at the lateral epicondyle of the femur, along the popliteus, and at its insertion.[14][16] Patients also present swelling and redness.[9] There must also be attention for asymmetry, erythema of the involved tendon, change in range of motion [15]


Physical examination: the patient sits in ‘ a figure 4’ position with the affected leg in a crossed-legged position, the hip flexed, abducted and externally rotated and the knee flexed with the leg crossed over the opposite extremity. The therapist palpates the posterior lateral corner looking for tenderness.

The treatment for popliteus tendinopathy includes rest, ice application, elevation, an elastic wrap, physical therapy, and nonsteroidal anti-inflammatory medication for pain, such as aspirin or ibuprofen. Additional treatment for popliteus tendinopathy may include oral corticosteroids or corticosteroid injections. Many individuals find a compression bandage or a knee sleeve very useful to reduce symptoms.[10] Alternatively, in order to reduce the pain, the physician may also recommend taping the area of the injury.[10] But when it comes to severe tendinopathy (symptoms persist for more than 6 months), surgery has to be performed to remove the tendon sheath.[10]


SB Tibrewal in an article entitled Acute calcific tendinitis of the popliteus tendon – an unusual site and clinical syndrome, described that the patients were treated with Neoprin knee splints, anti-inflammatory medication (Diclofenac 50 mg tds) for 2 weeks and physiotherapy on an out-patient basis.[9] All patients responded to an injection of corticosteroids and local anaesthetic with immediate pain relief.[9]

The key to physical therapy should be to train patients to perform tasks using a technique that is natural for them. One should avoid tissue stresses associated with moving too far into a genu varus or valgus posture, or fast tissue stresses with patients with poor dynamic lower extremity postural stability.[6]
The treatment of tendinopathy is most of the time conventional. The purpose of the treatment is to reduce pain, as well as improving the functionality of the knee. The standard therapy consists of rest (RICE), NSAIDs, and muscle strengthening exercises (eccentric training).[15]

For the popliteus, eccentric strengthening (closed kinetic chain) of the quadriceps is effective to reduce strain on the popliteus.[14]
Patients should not run until the knee is free of pain, then they should limit their workouts and downhill running for at least 6 weeks. During the treatment, cycling provides a good alternative exercise.


Ultrasonography, shock wave therapy, orthotics, massage, and technique modification are treatment options, but few data exist to support their use at this time.[18][19] Using ultrasound and performing transverse friction massage can be part of the therapy as well, as it will improve the healing process.[20]
Surgery is an effective treatment that should be reserved for patients for which conventional therapy has failed.[15]


It is also necessary to wear correct shoe wear that fixes the hyperpronation and prevents popliteus tendinopathy.

Exercise 2: Step task
In this exercise, the patient has to do a quick loading-unloading step exercise. This means that the exercise will be done as fast as possible, without losing the integrity of the exercise.

Exercise 3
A stepping task performed on an unstable surface.