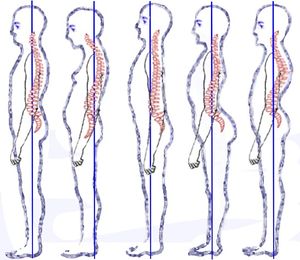 Pelvic tilt (PT) is a position-dependent parameter defined as the angle created by a line running from the sacral endplate midpoint to the center of the bifemoral heads and the vertical axis[1]. The average ranges of anterior and posterior pelvic tilting are 13.0 ± 4.9°, and 8.9 ± 4.5°, respectively.[2] The image shows starting from the left demonstrates- the pelvis in neutral followed by a posterior tilt through to an anterior pelvic tilt. For more information on posture variants with altered pelvic tilts see sway back posture and low back pain related to hyperlordosis. 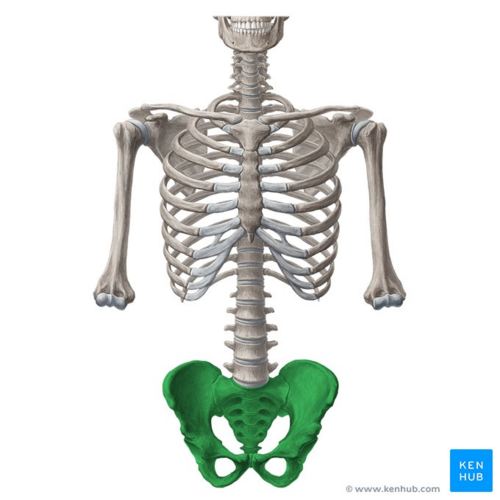 People with chronic low back pain exhibit reduced proprioception in the pelvic region and are less ‘movement-aware’ with potentially reduced postural control. This raises a question of whether postures or activities performed using extremes of certain movements (e.g. excessive or restricted movement) may predispose people to LBP.[3]

This video gives a good overview of pelvic exercise progression.

Pelvic Tilt exercises activate the intrinsic core stabilizers so that the core is working and the low back doesn’t take as much strain. The Basic Pelvic Tilt is an isometric hold to engage the intrinsic core stabilizers. Once this is learnt teach the client to use this bracing movement to protect the low back during eg lifting.

The following exercises should be progressively taught and mastered.

The patient lies on his back with his feet flat on the ground and 60 degrees flexion in the knees.

Once you can hold the basic pelvic tilt, you will progress the move and add in movement. Adding in movement will force your core to work harder to stabilize.

The First Progression is the Pelvic Tilt With March.[edit | edit source]

To add the march, you will lie on your back and perform the Basic Pelvic Tilt exercise. However, once you’ve engaged your abs and tilted your pelvis you will lift one foot up off the ground, bringing your knee in toward your chest.

Keep alternating legs, marching until all reps are complete. This should be a controlled march that you can speed up as you become confident in your ability to keep your low back against the ground and your abs braced.

To do the double knee tuck, you will perform the basic tilt, but while keeping your low back against the ground, you will tuck both knees in toward your chest instead of simply holding. Move slowly and make sure to keep your low back against the ground as you lift both knees in toward your chest. If at any point your abs aren’t engaged and your low back isn’t firmly pressed into the ground, pause and reset or regress the movement back to the march until you are ready for the double knee tuck. It is very important that you focus on quality movements and not just progressing as quickly as you can.

Progress further when tilt is controlled with the Double Knee Tuck, to the Pelvic Tilt with Single Leg Lowers.[edit | edit source]

To do the single leg lowers, engage your abs with the basic pelvic tilt and raise both legs straight up toward the ceiling. Keeping your abs engaged and your low back against the ground, lower one leg down toward the ground. The closer to the ground you lower the leg, the harder your abs will have to work to stay engaged. The goal is to lower the leg so that your heel is just hovering off the ground. As you lower the leg, make sure to engage your glute as well. Then, keeping the leg straight, raise it back up and lower the other leg. Alternate leg lowers, keeping the other leg straight up toward the ceiling. Work to lower the leg as close to the ground as possible. Don’t feel that you have to lower the leg all the way down if you can’t keep your core engaged. You can increase your range of motion as you become better able to activate your core. If at any point your low back isn’t pressed firmly into the ground, reset and even regress the movement. Either don’t lower the straight leg all the way down or go back to the Double Knee Tuck.

For the double leg lowers, set up in the pelvic tilt with your legs raised up toward the ceiling (same as for the Single Leg Lowers). Then with your low back firmly against the ground and your abs braced, lower both your legs down toward the ground. If at any point while you lower your legs, your low back comes off the ground, stop and reset. Then either decrease your range of motion or regress to the single leg lowers. However, if you can keep your abs engaged, lower your legs down so your heels are no more than an inch off the ground before raising them back up. You should also engage your glutes as you lower down. And make sure that your legs stay as straight as you can throughout the motion.