Low back pain (LBP) is a condition of localized pain to the lumbar spine with or without symptoms to the distal extremities whose aetiology is commonly unknown.[1] The link between LBP and pelvic floor dysfunction (PFD), particularly in women, is becoming evident in the literature, however, characteristics that define this correlation have yet to be established[2]. Pelvic floor disorders (PFD) occur when the muscles that comprise the pelvic floor fail to properly contract, which can adversely cause urinary incontinence, pelvic organ prolapse, fecal incontinence, or other sensory and emptying abnormalities of the lower urinary and GI tracts.[3] Pelvic floor dysfunction (PFD) is multifaceted and can be characterized by parameters such as weakness, poor endurance, excessive tension, shortened length and overactivity.[2] Current evidence shows that individuals with low back pain have a significant decrease in pelvic floor function compared to individuals without low back pain.[4]

Low back pain (LBP) is one of the most common musculoskeletal conditions; approximately 70-80% of the population will experience at least one episode of LBP during his/her lifetime. Trauma, disease and even poor postural habits are some of the myriad causes of LBP, however, only about 15% of cases can be attributed to a specific cause. Studies show a poor correlation between the pathology and associated pain and disability.[4]

Over 25% of all women and more than a third over the age of 65 experience PFD. The true prevalence of PFD is underestimated for several reasons: heterogeneity in study populations, lack of standardized definitions, and under-reported symptoms due to the sensitive nature. Even though PFD is a physiological problem, the psychosocial impact can be much more detrimental to the patient’s quality of life. Chronic health problems associated with PFD are estimated to increase by 50% over the next 30 years due to the increasing numbers of women reaching age 65.[5] PFD does not typically have one specific cause. The development of PFD most likely involves anatomical, physiological, genetic, reproductive and lifestyle components.[1][5]

The major risk factors are

A longitudinal study on younger, middle-age and older women reported that women with pre-existing incontinence, gastrointestinal problems, and breathing disorders were more likely to develop LBP than women without such problems. [6] This was considered to be a result of changes in morphology and altered postural activity of the trunk muscles including muscles of respiration and continence which provide mechanical support to the spine and pelvis[7]. 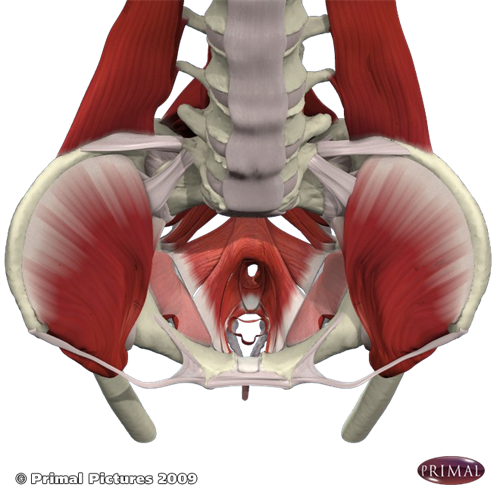 Anatomy of the Pelvic Floor - copyright and courtesy of Primal Pictures Ltd. www.primalpictures.com

Bone and ligament structures, muscle compression forces and nervous system control all contribute to lumbopelvic stability. The bone and ligament structures include the lumbar vertebrae and supporting ligaments, the pelvis, symphysis pubis and sacroiliac joints. This arrangement transfers weight from the upper body through the lumbosacral spine and across the pelvis to the femoral heads. The diaphragm, transversus abdominis, PFM and multifidus work synergistically to influence posture through intra-abdominal pressure regulation and thoracolumbar fascial tension. The nervous system evaluates the requirements of lumbopelvic control, determines the current status of the region and enacts strategies to meet those functional demands.[8]

The pelvic floor forms the inferior border of the abdomino-pelvic cavity.[5] It supports the abdomino-pelvic organs and the PFM are the only transverse load-bearing muscle group in the body. These muscles function as a unit instead of individually contracting. They play an important role in maintaining and increasing intra-abdominal pressure during functional tasks such as lifting, sneezing, coughing, and laughing to prevent urinary and fecal incontinence. The PFM, along with the deep abdominals and multifidus, use a feed-forward mechanism to stabilize the trunk and control intra-abdominal pressure in response to trunk perturbations.[4][7]

Some characteristics of patients who present with LBP along with pelvic floor disorders:

Many women with pelvic core neuromuscular system (PCNS) dysfunction present with a posterior pelvic tilt and decreased lumbar lordosis. Studies suggest that pain in the sacroiliac region may decrease motor control of the PFM.[4] Men can also have disorders of the pelvic floor, however due the anatomy of the male pelvis, it is less common. The male pelvis is more densely packed which allows for faster proprioceptive overflow and muscle recruitment.[9]

PFD and LBP are difficult to diagnose because they present many challenges due to poor association between pathophysiology, poor patient reported signs and symptoms and anatomical evidence.[5]

Make sure to take a thorough history, clear any red flags, and ask the patient how signs/symptoms have affected his/her function. The following questions can be used to determine if the patient is experiencing any signs/symptoms of PFD.

Evaluation of LBP should begin with completion of the Oswestry Disability Index (ODI); based on the patient’s score a treatment based classification system or an impairment-based approach should be used to determine the best intervention.

The majority of this patient profile (LBP and PFD) will most likely benefit from stabilization interventions. Based on the patient’s primary complaints, it may or may not be necessary to proceed with a full pelvic floor examination.

Pharmacotherapy addresses the incontinence issues instead of targeting the overlying issue of PFD. The aim of these medications is to increase urethral closure pressure by targeting striated and smooth muscles of the urethra.[11] Some patients with LBP may choose to use pain medications or corticosteroid injections to relieve symptoms, however, these therapies do not address PFD nor the underlying problem of LBP.

Surgery is indicated for women with LBP and PFD who have not benefited from conservative treatments such as physical therapy and have symptoms that significantly impact their daily life.

Physical therapy treatment modalities include pelvic floor training, manual therapy, biofeedback, movement patterning and behavioral modifications. Manual therapy and biofeedback are used to increase awareness of the pelvic floor and improve the patient’s ability to contract and relax the muscle in addition to strengthening it.

Pelvic floor muscle control is key to preventing urinary incontinence and treating pelvic pain. Pelvic floor dysfunction can be treated by strengthening and improving awareness and control of pelvic floor muscles[13]. Combination of PFMT and biofeedback has shown improved results compared to PFMT alone, and some studies find that electrical stimulation can augment the benefit of biofeedback and PFMT[14].

Randomised control trial[7] carried out on 20 women with chronic LBP, comparing routine physiotherapy with additional PFM training showed greater improvement in PFM strength and endurance along with significant reduction in pain and functional disability, but no significant difference was found between the two groups. It seems that the PFM exercise combined with routine treatment was not superior to routine treatment alone in patients with chronic LBP.

Current evidence supports the preceding exercise protocol; each exercise protocol has the common goal of regaining neuromuscular control of the pelvic floor and deep abdominal muscles in a functional matter.[17] There is also strong evidence for PFM training as a conservative treatment for stress urinary incontinence.[8]

Treatment for this patient should also include education on healthy lifestyle habits to promote optimal functioning of the lumbopelvic stability system. Examples of these habits include good posture, maintenance of a healthy body weight, proper diet, routine exercise, and refraining from smoking.

Transabdominal ultrasound has proven that the PFM and trunk musculature co-contract to provide stability to the lumbar spine and pelvis. Lack of neuromuscular control in the PFM can be associated with trunk instability, which results in LBP.[4][6][24][8][9][25][26]

It is important for the physical therapist to consider pelvic floor dysfunction when evaluating and treating patients with LBP. Although recent research has made many gains in relating LBP and PFD, much more progress is needed to definitively establish the relationship between the two conditions and identify successful intervention techniques.