Dr. Kegel originally proposed his exercise regime in 1948 as an alternative to surgery, which he believed to be inefficient and sometimes unnecessary.

Kegal exercises involve the isometric contraction of the pelvic floor muscles. This can be described as the sensation of stopping urination mid-flow, ideally contracting from back to front. The exercises are necessary to help produce sufficient strength, co-ordination and endurance to deal with life post-partum and the effects of ageing.[2]

Dr.Kegel, in his practice, stated that there were three steps to his method:

It is important to observe that Dr.Kegel defined his exercises "operationally", rather than "formally". That is, rather than specify "how to do the exercises", he specified what would be measured if they were done correctly with his device in place. He invented and used the world's first biofeedback instrument, the perineometer to objectively assess pelvic muscle strength, both in the office and in daily at-home use by the patient. 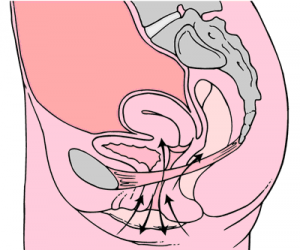