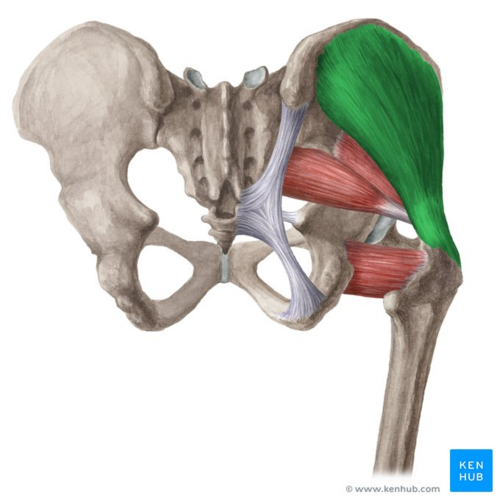 Gluteus medius is located on the lateral aspect of the upper buttock, below the iliac crest. The superior muscle is broad with the muscle narrowing towards its insertional tendon giving it a fan-shape. Gluteus maximus covers all of the gluteal muscles except for the antero-superior third of the Gluteus medius. This uncovered part of Gluteus medius is the safe area at which we should apply buttocks dorso gluteal intramuscular injections.

This 2 minute video is a good summary of the gluteus medius muscle.[2]

Gluteal, or lateral surface of the ilium between the posterior and anterior gluteal lines and gluteal aponorosis . This is a large area, reaching from the iliac crest above to the almost the sciatic notch below.[3][4]

Glutes medius is divided into three portions similar to deltoid muscle of the shoulder joint :[3]

The gluteus medius is supplied by the superior gluteal nerve (root L4,L5 and S1). Cutaneous supply is mainly provided by L1 and 2.[3][4]

As mentioned by Vladmir Janda' Glutes Medius is one of the phasic muscles that tends to be inhibited in our body by many causes :

There are many exercises that help in activation of Glutes medius each exercise activate Glutes medius by a certain percentage as shown by EMG activity. We divide them as following[5]:

Find the middle of iliac crest which is located above the greater trochanter.Two fingers below is the bulk of gluteus medius. The contraction of the muscle can be felt by alternate single leg-stands.[3]

First, you have to find the causes for inhibition or weakness of the Gluteus medius and try to prevent it and then try to activate Glutes medius.