General Organisation of the Nervous System

The nervous system commands muscles, controls the functioning of all organs and provides information about the outside world through sensory information. It is the seat of the intellectual faculties.

From an anatomical point of view, we distinguish: 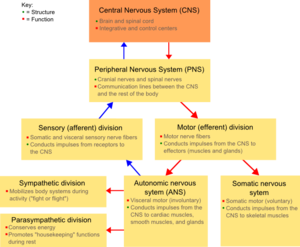 The nervous system (along with the endocrine system) is the the body's regulatory and communication center. 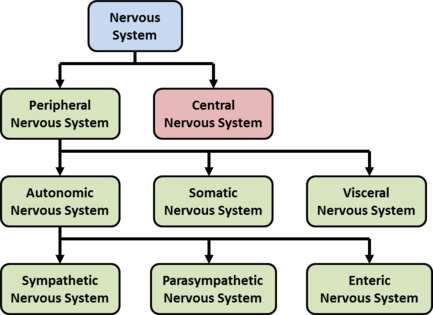 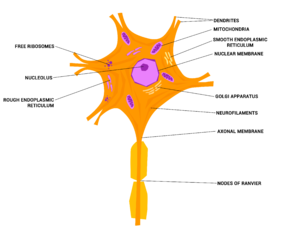 Role: Reception or production, conduction and transmission of messages in the form of an electrical signal.

In the central nervous system :

Closely associated with neurons, more numerous but smaller in size. They are the support of neurons and have other important and unique functions (nutrition, immune ...)

The neuroglia comprises 6 cell types, depending on location, structure and function: 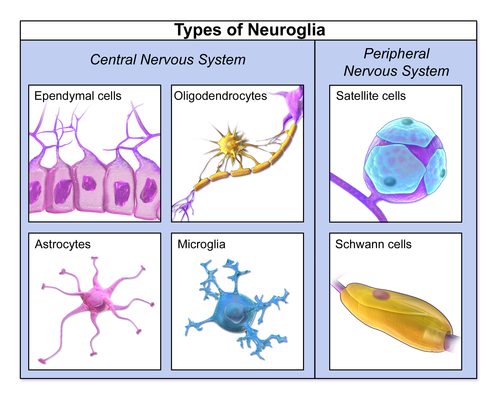 They are the producers of myelin (substance lipid that forms the myelin sheath + several concentric insulating layers that surround the large axons and facilitate nerve control).

They form a capsule surrounding the cell body of neurons located in the lymph nodes. They provide a large number of support functions.

They form the myelin sheaths (equivalent to Schwann cells)

Very branched cells, their extensions adhere to neurons and cover the surrounding capillaries and are part of the blood-brain barrier.

They constitute a permeable barrier. It is a source of "stem cells" nerves that can differentiate into neurons or gliocytes.[4]