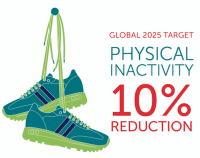 Exercise Works! was formed in 2011. A key vision for the organisation is to enable all health care professionals to provide safe and effective exercise advice to patients and the public.

Ann Gates MRPharms is the founder and CEO, and is a key-note speaker, presenter, author, blogger, and disruptive innovator for physical activity advocacy and influence!

John Gates MCSP is also a Director of Exercise Works and a physiotherapist within a UK hospital. He joined the company in 2016.

In 2014, as part of Ann's role as an Emerging Leader for the World Heart Federation, she was asked what she could do to help lead and deliver on the WHO "25x25" goals*, and especially the 2025 WHO aim to reduce physical inactivity by 10% by 2025. On one side of a page, a three year project plan was drawn up.

Phase 1: to provide an educational resource on exercise medicine and chronic diseases for undergraduate medical students in the UK. This project was successfully completed in 2014, with over 15 of the UK medical schools using and potentially examining on the resources. Glasgow Medical School became the first medical school, in 2016, to exam final year students on physical activity guidelines and patient care.

Phase 2: to develop the resources for all undergraduate, student: doctors, nurses, midwives, dentists, pharmacists, social workers and all allied health care professionals. In 2015, over 450+ downloads of the resources had been made by national and international schools of medicine and health. The resources were also evaluated by The University of Nottingham, using a team of over 29 international evaluators and physical activity experts. The evaluation scored the overall resources as 8/10 for quality.  The evaluators consisted of physical activity experts, exercise medicine professionals, exercise physiologists, health care professionals with a special interest in chronic diseases, and educationalists.The resources were endorsed for undergraduate use by The Council of Deans of Health, UK.

Phase 3: to enable all health care professionals, specifically physiotherapists, and community health/charity workers, especially in low and middle income countries, to access and use the resources to build capacity to deliver change within their own practice, communities, nations and internationally. This final phase of the plan covers 2016-2017. Exercise Works has partnered with Physiopedia to deliver on this important phase of the project.

The background to these projects is summarised in these two BJSM editorials:

The ‘Exercise Works’ Resource Set is a collection of evidence-based slide sets for teaching the benefits of physical exercise in 21 different areas of healthcare, including cancer, stroke, heart disease, mental health and post-surgical recovery. Nearly 30 authors**, all passionate and experienced in exercise prescription and chronic diseases, pregnancy, and surgery, developed the educational content.

Ann takes this view on the education of health care professionals of exercise medicine in the prevention and treatment of ill health:

“A qualified doctor, nurse, midwife or allied health professional may see nearly half a million patients, during their career: this has enormous potential for advocacy and the promotion of physical activity. These new resources will enable medical and allied health professionals be trained to deliver evidence-based, safe and effective exercise advice in the delivery of health care.”

Exercise Works! continues to promote and advocate for physical activity education and influence! Follow @exerciseworks for the leading research, practice and influence on "a movement for movement".

Many thanks, Ann Gates, Exercise Works!

The outcome of the meeting was a Political Declaration signed by all the UN Member States that now represents the NCD roadmap.

For more information about the resources and their remit of use in teaching and education, please contact: [email protected]