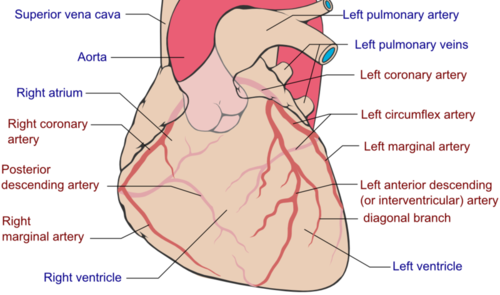 They branch and encircle the heart to cover its surface with a lacy network, perhaps resembling a slightly crooked crown.[2]

The typical configuration consists of two coronary arteries, arising from the left posterior and right anterior aortic or coronary sinuses respectively, in the proximal ascending aorta. These are the only two branches of the ascending aorta.

Occasionally there is a trifurcation (in ~15%), with the third branch, the ramus intermedius, arising inbetween the LAD and LCx. In left dominant hearts, the LCx supplies the posterior descending artery (PDA)[2]. 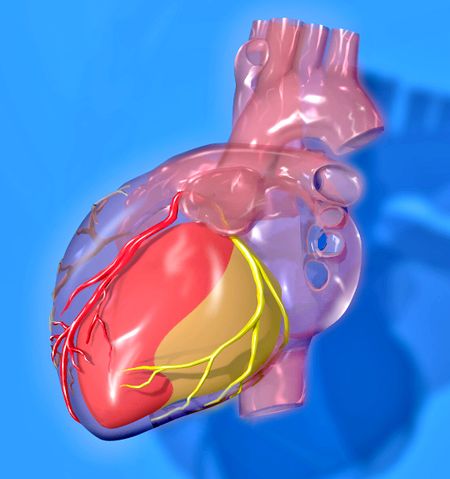 The RCA emerges from the anterior ascending aorta and supplies blood to the right atrium, right ventricle, SA node, and AV node.

The LMCA gives off two major branches; the left anterior descending (LAD) and the left circumflex (LCx) coronary arteries, which supply blood to the left atrium and left ventricle.

Like other arteries, the coronaries may be subject to arteriosclerosis (hardening of the arteries) causing Coronary artery disease (CAD, also called coronary heart disease, or CHD).

Arteries that have become extremely narrow can cause shortness of breath and angina during physical activity. If a coronary artery suddenly becomes completely blocked, it can result in a Myocardial Infarct/heart attack[3].