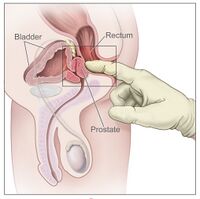 Proctalgia fugax or functional recurrent anorectal pain is part of a spectrum of functional gastrointestinal disorders presenting as episodes of sharp fleeting pain that recur over weeks, are localized to the anus or lower rectum, and last from seconds to several minutes with no pain between episodes, in the absence of an organic disorder to explain pain, .[1] The severity can be severe enough to wake the patient from sleep. The patient describes the symptoms as a blunt knife inserted into the rectum[2]. The pain is localized to the lower rectum and anus[1] and unrelated to defecation. [3] 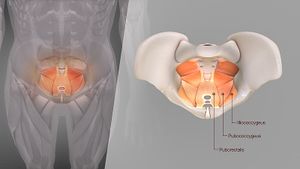 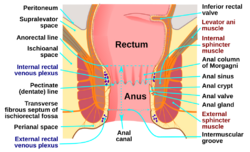 External, and Iinternal sphincter in red.

It is a transitory disorder that usually does not need further investigations and can be treated by a primary health care physician. It is difficult to detect its prevalence as the patient does not seek a doctor's help unless the symptoms become severe it represents about 8- 18%[5]and is more common among women than men between 30 and 60 years most affected age[3].

The patient will complain of episodes of localized pain at the lower rectum and anus, the episode lasts for a second to minutes (20 minutes maximum) with no pain between episodes. Symptoms may occur once per month, with no factors that trigger symptoms, however, anxiety and stress may induce symptoms[6]. Symptoms like; nausea, vomiting, sweating, and dizziness are rare. Episodes occur at irregular intervals and are unpredicted[2]. In a study the intervals range from 1-18o times/ year[8], another study demonstrated the recurrence of proctalgia fugax less than 5 times/ year in 51% of patients.

Rome III diagnostic criteria for proctalgia fugax include the following:

In research, it is important for symptoms to be checked for 3 months while in clinical practice proctalgia can be diagnosed before three months[9][10]. 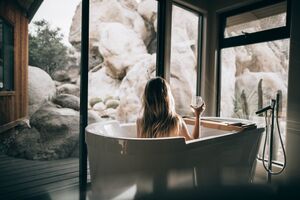 The symptoms of proctalgia fugax are rare and last for a short time, thus making its diagnosis and finding treatment options challenging[12]. The key is reassuring and explaining to the patient about the disorder that “cramp in your bottom” is harmless and not indicative of any serious bowel disease. As the episodes of pain are brief and infrequent, they usually don’t need treatment. A hot sitz bath is recommended[3]. For patients suffering from long, frequent symptoms:

Overactive or spasm of the pelvic floor muscles is common in the most pelvic floor disorder syndromes from this, we can find different disorders may respond to the same treatment approach[14]. There are no definite recommended treatment protocol for proctalgia fugax[2] but there are small studies found that biofeedback, galvanic electrical stimulation, and massage for levator muscles were effective and biofeedback was more effective than galvanic stimulation and the massage for levator muscles[14] as for levator ani syndrome.

Biofeedback is used to reduce the tension of pelvic floor muscles, Galvanic Electrical Stimulation GES with a low-frequency current is used to break the cycle of spasm[2].