Jump to:navigation, search
Welcome to Assistive Technology in Rehabilitation Content Development Project. Please do not edit unless you are involved in this project, but please come back in the near future to check out new information!! If you would like to get involved in this project and earn accreditation for your contributions, please get in touch! 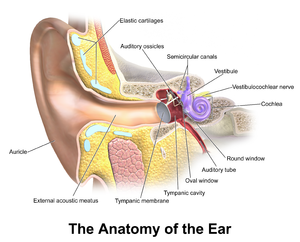 Over 5% of the world’s population (430 million people) require rehabilitation to address their ‘disabling’ hearing loss (432 million adults and 34 million children). It is estimated that by 2050 over 700 million people (one in every ten people) will have disabling hearing loss.

Hearing aids, by definition, are sound-amplifying devices that increase the user's ability to detect noise. The components of a non-invasive hearing aid vary widely but broadly consist of a microphone, amplifier, receiver, and battery. The microphone converts external acoustic energy into electrical energy, which is amplified by the amplifier. The receiver detects this and converts it back into acoustic energy, projecting sound into the ear canal. The amplification is driven by the battery, which can be made from zinc-air batteries, mercury, alkaline or rechargeable batteries. A non-invasive hearing aid aims to increase the sound levels delivered to and hence detected by the hair cells in the cochlea.

There are various hearing aids, and their selection is not a ‘one-size fits all’ approach. Selection is influenced by factors that include audiometric deficit (laterality, frequency, and degree of loss), cosmesis, and the patient’s needs, lifestyle, and priorities.

Hearing aids, like everything else, are advancing in leaps and bounds. This is helped along by the fact that a hearing aid is basically a computer dedicated to processing sound. Some modern hearing aids can process sound at over a billion operations per second.[3]

Other issues of Concern[edit | edit source]